OjovoladorVuela para vivir, vive para volar.
Home Paragliding Everything about the Wave Leading Edge of the Boomerang 12, explained by... 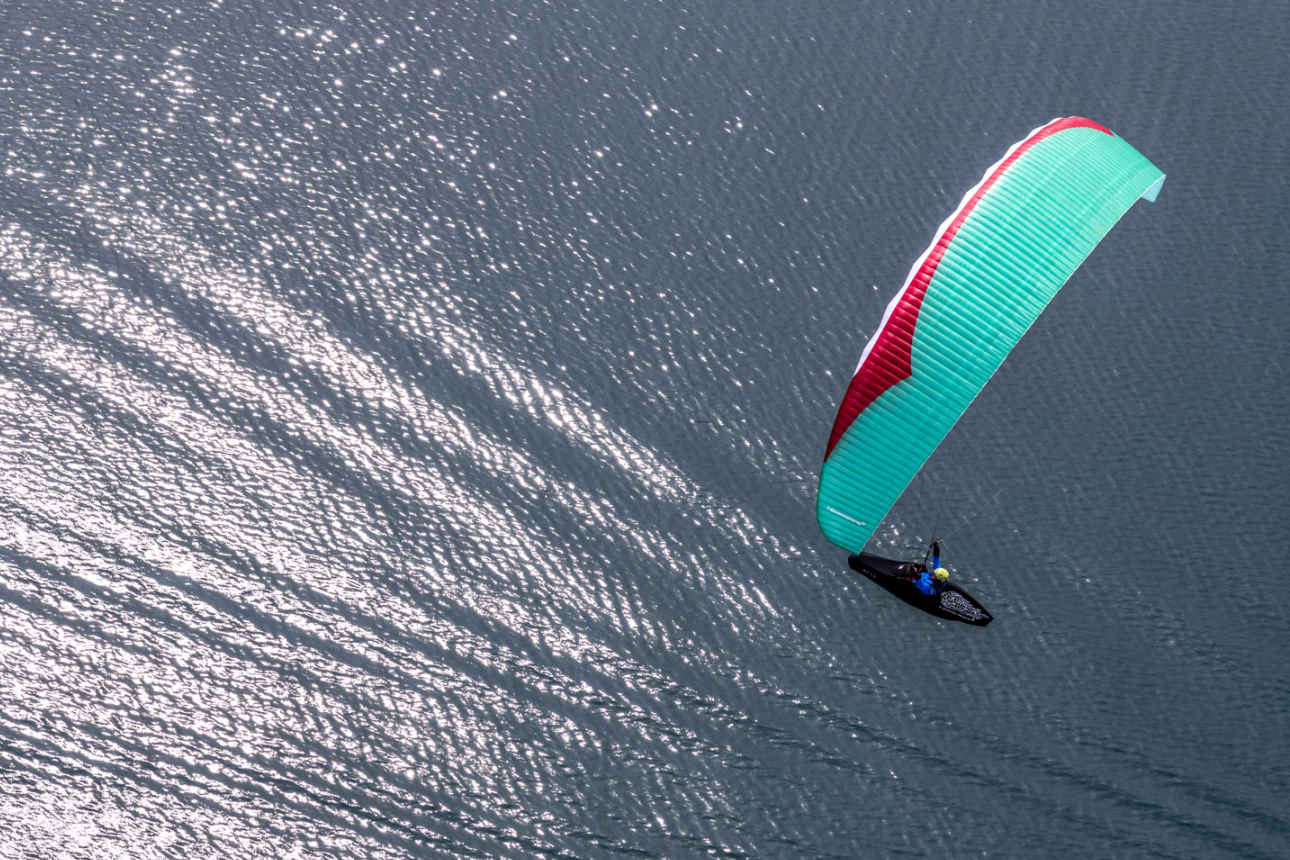 This is a live interview with the veteran Korean paraglider designer via our Facebook page. You can access the full interview in both links below. There are two links because the livestream was interrupted and we had to restart it. Also below, a brief text with the conversation highlights.

Below, the summary with the conversation highlights in English:

Daniel Crespo – How did this project start?

GS –For years I have been looking for something that would be a true physical change of the wings, without which, it would be impossible to have any kind of improvement in terms of performance and safety. One day, I was contacted by a professor I know proposing this Wave Leading Edge based on the shape of Humpback whale fins. This is a design that is already being used in other technologies. It still hadn’t been applied to paragliders. But as soon as I heard the idea, I simply had to try it. And since then, I’ve been spending tons of money and time in this.

GS- It’s the lab we have to make this research, in partnership with the University of Seoul, other institutions, and the Korean government, a genuine and formal investigation applied to the paraglider of the Wave Leading Edge, funded by Gin and the government and using the human and physical resources of the institutions involved. It’s scientific research. Until now, it had always been trial and error via prototypes. With the Gin Lab, we wanted to change this design method for another one, a more scientific one, which also gave us the advantage of having full unllimited access to the wind tunnel for the first time for our industry, so now we can develop wings based on proven fundamentals.

DC -How do you work with the paraglider in the wind tunnel?

GS- The Wave Leading Edge is the tubercules. These tubercules are already being used in planes, wind turbines, and other applications. At first, we didn’t know how to create them in a paraglider, nor at what distance to put them from each other, what size they should be, or how long in a line. Nobody knew, neither the professors nor our team. So we decided to experiment with them in the wind tunnel with 3D models. In the beginning, we only tested half a wing producing over 100 different 3D formats to arrive at formulas and calculations. Starting from this information, I created the prototypes and we flew them to compare the results we had obtained in the tunnel with those of the real prototypes. We arrived to formulas with all the data compiled from the 3D models and our actual real results with the prototypes. There were many mistakes made when we started with the tubercules. Initially, we had them all along the leading edge, but even though we discovered that the results obtained in the wind tunnel were correct, when we took it to real life, that is, when we built the prototype and flew it, the wing tips stalled and the wing started to spin. Until the professor discovered that because the paraglider profile is curved, we didn’t need to have the tubercules all along the leading Edge from wing tip to wingtip, we just needed to have them in the central part of the wing. We arrived to this conclusion after making 23 real prototypes and contrasting the calculations previously obtained in the lab. The important part was discovering the necessary distance between each tubercule, as well as their total length in a row. We also had to figure out structural problems inside the wing for its manufacturing. We had to modify the internal structure of the paraglider so it would work with the different pressure points taking place inside the actual wing. We ended up testing each separate part of the wing in the wind tunnel, then we applied the results to the prototype feedbacking the results to the lab. It was back and forth for a period of two and a half years until we reached the end result.

DC -Are you going to apply this to your entire line of paragliders?

GS- That´s why we needed to get a formula. I can apply all the results obtained in the wind tunnel to any glider thanks to the formula. Right now, we are testing our EN C Bonanza with the tubercules. I am flying it currently myself. It is an EN C 2-liner with tubercules that is demonstrating an amazing performance that´s very different. We are very happy right now with the behavior of the EN C with the tubercules and 2 lines because the tubercules show great pitch stability. And when I fly it next to other paragliders, my 2-liner is a lot more stable than any other 3 liners and that´s the tubercule effect.

DC – This must have been a very expensive process. Could we know how much it cost?

GS- Well, we asked for a subsidy to the government. The government in my country helps medium and small size companies with funds. We presented them with this project and they financed us because they thought it was interesting. We received a good amount of money. The cost of this project specifically was 1.5 million dollars. It’s a lot of money. And it was 2 and a half years of my personal uninterrupted work as well. And finally, we arrived to this formula, that I can now apply to any model. It was a great investment, a huge effort, but it was useful both for us and for the universities and the government because we gave them back real physical results.

DC – Do the tubercules age in time and deform?

GS- The construction of a conventional leading edge and that of the tubercules demand, in whole, the same number of cuts and material. But the fabric is sewn in a different direction.

DC- Is the Wave Leading Edge harder to sew and how does that affect the price?

GS- Though it is a different sewing process, it is not harder to make than a traditional wing. This technology isn’t so difficult to sew. During the research, we also considered the sewing subject. Because if it’s too difficult, then it isn’t practical. We also designed the sewing process to be able to manufacture them with a similar cost.

DC- In terms of safety then, this great advance we see with the Bonanza is in terms of collapses. How do the tubercules affect a collapsed wing?

As we go deeper into how tubercules work, or how the Wave Leading Edge works, what matters is the airflow inside the wing. When there´s a collapse, the wing is stable in terms of pitch. Pitch stability is crucial when facing any collapse. With the tubercules, the wing simply does not come out abruptly and the wing does not spin. And that’s a true difference with respect to the classic leading edge. You may think that the bumps themselves of the tubercules would end up being an obstacle or would block a collapse from reopening, but in fact, it is the opposite. When collapsed, the wing does not want to come out abruptly, it remains stable, the spinning is very soft and when it reopens, it opens softly. It is truly a very, very soft reopening.

DC- And when will the new Bonanza 3 with Wave Leading Edge be ready, asks the audience?

The plan is to have it available by the end of the year.

DC- Will other manufacturers be able to use this technology?

GS- Good question. We have the patent. I haven´t yet thought about this yet. But we know that this technology is a significant advance in terms of safety, so if this technology helps the entire industry in general, they could use it. Even though we haven’t yet considered sharing our patent. We’ll see what the rest of the manufacturers want to do. Or if maybe they have another physical change of format to propose. I still don’t know, but we would consider it.

DC – Could it be applied to EN A paragliders?

GS -We are considering it.

DC- This technology represents a significant advantage at the time of flying the wing with full brakes. How do you see it for precision competitions?

GS- It’s true. We can fly at a very slow speed without stalling. So yes, we will try to make the entire wing range with Wave Leading Edge.

DC- As a closing, how do you imagine a paraglider 50 years from now?

GS – For the time being, I have no idea what’s going to happen but it will continue evolving for sure. In the end, regarding the future, the key of the matter is how easy flying a wing is, because this is what will make the market grow. Because if a pilot feels comfortable, and feels that flying is an easy and enjoyable thing in all types of conditions, then the pilot will enjoy more in the air. The pilots who stop flying do so because they get scared. We have to aim at wings that are easier to fly and work in that direction.