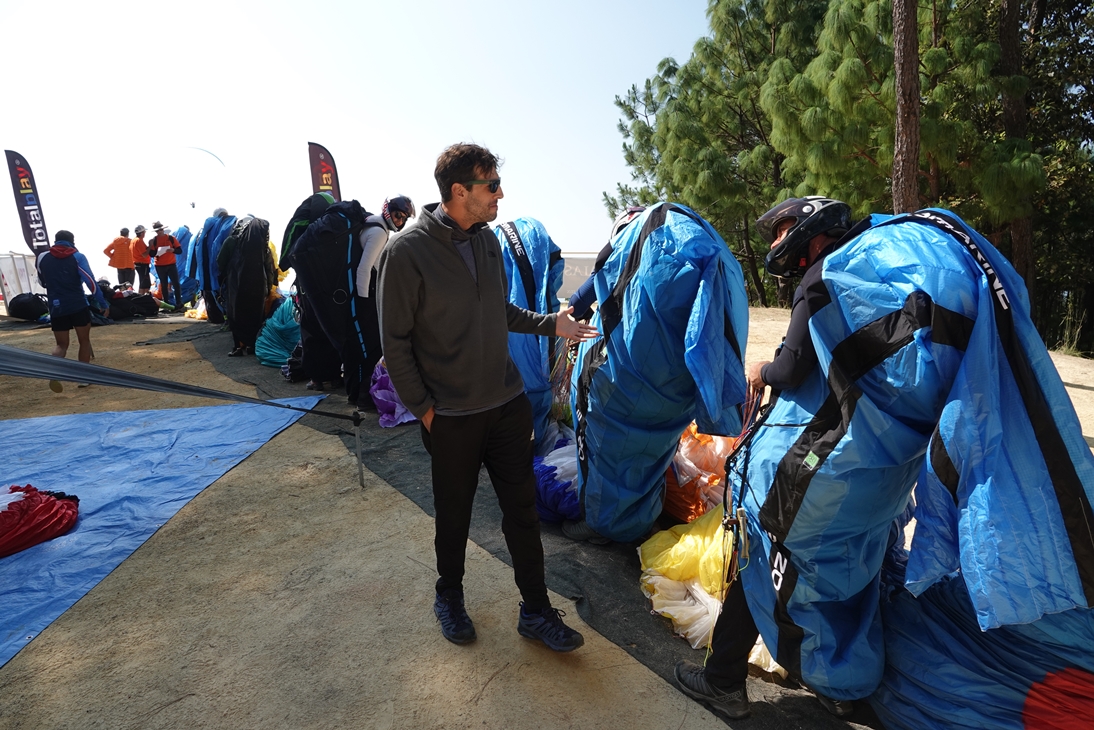 A World Cup Super Final isn’t only the perfect setting where to watch the best pilots in the world competing against each other to win, but it is also where to check out the latest and newest competition products of the industry and where to see them performing live, hand in hand versus their competitors, as they are introduced to the market for all users. In this post, we’ll be covering all the race harness news of the industry.

Niviuk have several of their sponsored pilots flying with the new Drifter 2. This competition harness incorporates the latest technology available; it comes with a large rear fin (one of the latest trends for high transition performance) and a very refined front section that covers all the chest of the pilot up to the neck leaving only the arms out. The cockpit (that’s also covered) can be seen by the pilot through a transparent screen. The official tech data of the harness hasn’t been released because it is not yet available for its purchase but it has already been sent for its certification to AirTurqouse in July this year, so its launch to the market should be taking place soon.

Total Drifter 2 at the Super Final: 8

At the Korean house, among the already known Genie Race 4 harnesses, there is now a new option, an updated version that has been modified to incorporate a longer back fin (a trend that is already well-installed in the market) with a higher vertical section, along with small compressors that inflate it in flight to boost the inside pressure and make the inferior part of the rear fin more rigid avoiding bends. The modification has also allowed more room behind the parachute compartments making them more rigid as well, in favor of an altogether better structure. Of the mentioned updated GR4s, two different options can be seen in this race, the black conventional one and the editions in red celebrating Gin’s 40 years in flight.

But that’s not all, the most appealing novelty is the prototype in competition (future Genie Race 5) coated in ripstop, like the Genie Light 3, with a much longer rear fin and a higher vertical section. The most astonishing surprise is the bulky windshield that covers the entire cockpit and the pilot’s head. This windshield, for its size and its mini lateral windows near the pilot’s chest, gives the feeling of being inside the cockpit of a combat jet.

Yes, Kortel also is working on the development of its own submarine harness (we will refer to it using that name in tune with the trend) during this Super Final. In the images we can see the wool strings attached to its back fin during a landing phase, Justin Puthod dressed in his white submarine by Kortel Design, and next to him, Honorin Hamard with Ozone’s Submarine. There is a single prototype by Kortel in this competition.

Though the Ozone Submarine is no longer a novelty since the same edition that was once a prototype (there was another edition of the Ozone Submarine that was similar to this one and a second different version of it with an arrow point shaped rear fin and mini fins in the inferior and superior parts of it) officially came out to the market a few months ago, some pilots are debuting with them in this race and didn’t have the chance to get familiar with them prior to it. This race harness is currently available for its purchase.

Total Submarines at the Super Final: 34

The remaining pods in the race, though not less important, comprise the renowned and successful XR7 by Woody Valley, CXC Max and Cxc Pro by Sol Paragliders, Genie Lite 3 and Genie Race 3 & 4 by Gin, Exoxeat by Ozone, Kanibal Race 3 by Kortel Design and one Vibe by Nearbirds, the manufacturer we chose to end this post with that’s presenting its submarine prototype with a Milano cut fin.

When will this latter harness be released? What is it called and how much will it cost? Nobody knows yet but we are definitely looking forward to seeing it in action soon. Aren´t we?