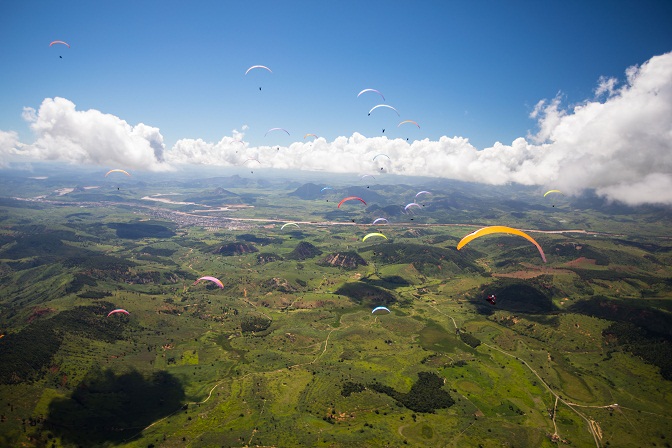 The time has come for 117 of the very best pilots from 18 different American Nations to battle it out during 7 epic days and crown their Champion.  Most important yet, a smaller selection of those pilots would have been selected by their nations to represent their country and fly their nation’s colours.  In any sport, competing for your country seems to be that extra special.

By Saturday 14th of March a new Pan American Champion and Champion National squad will be crowned. Who’s your money on?

Organiser, mega experienced local legend, Frank Brown is at the helm of an event which promises to be a little particular with the world’s Coronavirus outbreak, casting something of a shadow over us. Luckily, the organisers and local authorities appear to be doing their very best focusing on preventive measures.  All pilots will be checked daily by a team of medical staff before boarding the shuttle to take off, and pilots will be monitored for any symptoms during their time in Baixo Guandu.

The alert for the disease has also resulted in the relocation of the Super Final of the Paragliding World Cup (PWC) to Baixo-Guandu, which was scheduled to take place in Castelo from 24 March to 4 April. It has been announced that pilots temperature and health conditions will be checked twice daily. The PWC organization warns, however, that this Super Final might be cancelled if conditions are not suitable for such event. We’ll be keeping an eye on what happens in the next few days in this matter as well.

The official source of information for the Pan American champs is Hipoxia’s website here.

Ojovolador will report daily from Baixo Guando and bring you the best of the day action, stay tuned!