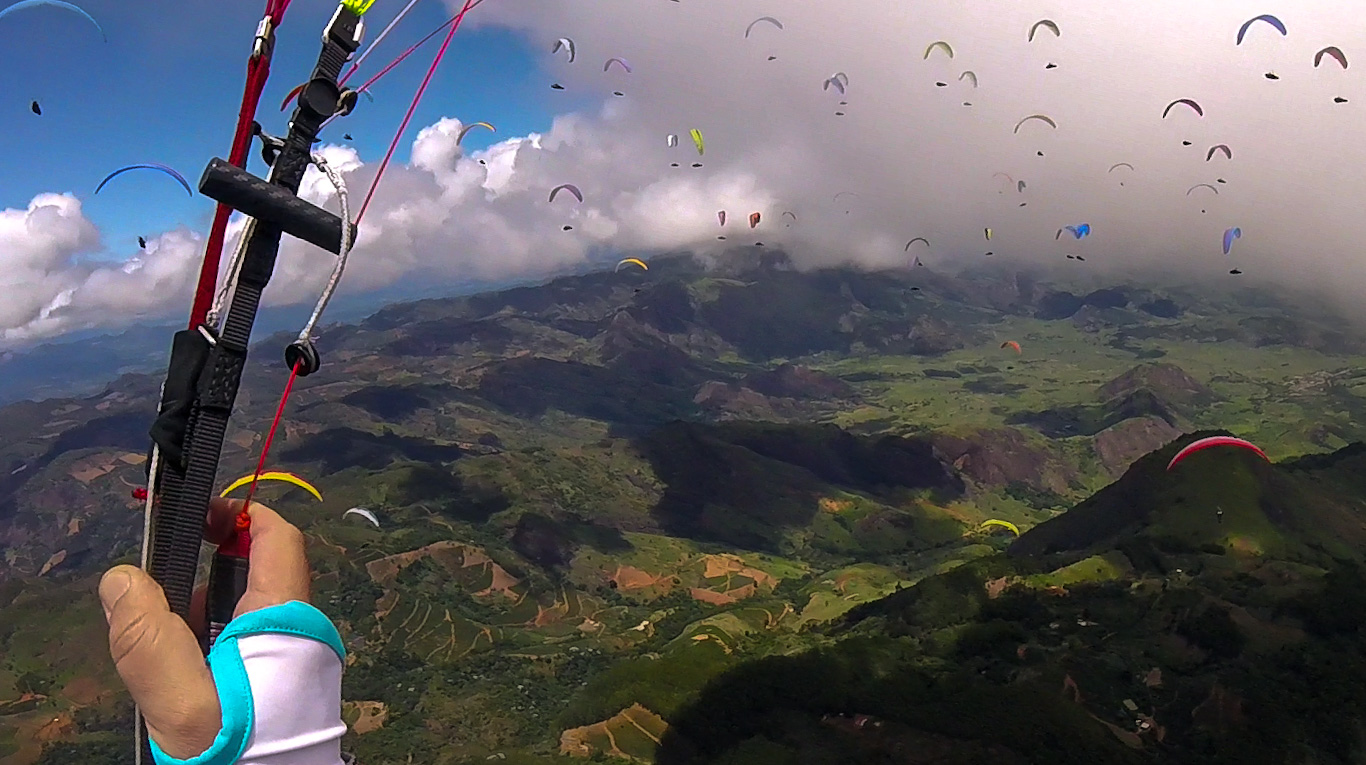 For one last time, we were greeted as usual by the Prefeito’s health staff who smiling, took our temperature and checked for any symptoms of COVID-19, before giving us the all-clear to go to take off.  This was the common denominator of our stay here. People looked after us all the time, both organizers and the public in general.  Thank you Baixo Guandu, and more on this later. A 63.2 km downwinder was set with a Start, 2 turn points and a final 5 km backtrack upwind. Aside from the gentle conditions of the first leg, it was the backtrack upwind that caused the most damage to the field.

As over development to the east of the Goal covered everything in shade killing conditions and strengthening the wind speed for those behind the massive lead gaggle, 61 pilots came in in the span of 3 minutes, with the first 9 pilots coming in in the same minute. Amongst them, the winner Brazilian Washington Peruchi, the only man in the 1h ’50s and 30.3km average speed. Rafael Saladini came in 14 seconds later with Gleb Sukhotskiy biting Rafa’s tail in third. Owen Shoemaker from Team USA had another good day, showing that the North Americans are consistently on top spots. I think they will be looking to climb on the steps of the podium for future events:

The first lady was local pilot Marcela Uchoa in 41st; in this way, the ladies all had a task win to their names. Nevertheless, it was Argentina’s Shauin Kao, second on the ladies on the day, 67th in Goal, who would take the overall female victory for the 4th FAI Pan-American championship! Shauin has worked hard in improving her race training, she was a shadow of her current self in past competitions and now is firmly the girl to beat.

On the male, Brazil dominated at will from day one. Dominated as a Team winning the Pan- American by Nations. Dominating as Individual with Rafael Saladini, strangely (or not) not flying for Brazil but for himself, the Brazilian was impossible to match to anyone in the Americas taking the first place for the Men’s Pan-American. Well done Rafa!!!!!

Impossible to match by anyone in the Americas it is, because in the end, leaving petite formalities of where each other is born, the man taking the overall victory was the mega impressive Tango lover, Team Russia’s Gleb Sukhotskiy. Well done Sir!!!! And respect from all of us. Gleb, is not new to the podium at all, winning his first PWC task about ten years ago and currently 78th in the World Ranking.

Start gates are always beautiful and this one was a cracker! As 100 pilots gathered at cloudbase just above take off, clouds started forming around us only a couple of minutes from the start.

As a result, the 100 of us all squeezed through a gap between the forming clouds giving us some images that will stay with us forever. Beautiful!  Scary as… but beautiful.

You can’t make this place up… so beautiful, from every angle so nice to fly, with birds to save the day when you are in trouble and a spider web of power lines anywhere from 50mt above ground level to the more normal 10mt height to keep things interesting all the way to the end. Scary, but hey, you can always land high, people need electricity in the farms just like you and me in the city. Great from Lula to implement policies for electricity to reach everybody back in the day. We can let this comp pass without a special mention for Peruvian sole representation, 16 years old Juan Francisco Ortiz Urrunaga and Brazilian Caio Henrique. It is not long since they switched nappies for XCPee tubes but don’t be fooled by their young age. These are experienced, well-feathered birds that will leave any field of old-timers eating their dust! These guys can fly and, as a reporter, I look forward to the years to come and the things they will accomplish. Who knows where they take the sport in the years to come. As a pilot, time’s clicking. We better hurry up to win something or these guys will leave no chance for that to ever happen.

The prize-giving ceremony and the Rock & Roll

The prize-giving ceremony was beautiful, the atmosphere was great as you would expect from Brazil and the band…. Holy Moly the band!!! They Rocked our socks of. This was a local three-piece band with mega cool lead singer on the drums, bass and lead guitar players of the same caliber. They started with a set of all the classics of Rock & Roll, those any less than an excellent player or performer would stay well clear of, Black Sabbath, Led Zeppelin, AC DC, you name it. The last three songs were a solid pogo that registered on the Richter scale as a mild earthquake! The word on the street is the band is back for Frankie’s big birthday coming up; try and get an invite for that one if you want to see them again ?

We have two for you.

1st place goes to Chilean pilot Javier “Bambam” Galvez for the luckiest escape.
Having ended up low, Bambam was scratching low for a landing place when he ended up in low ground full of power lines. He dodged one and another but eventually, without even seeing the third one he hits some power lines running between two low hills. He swings forward, the As and Bs from one riser snap, he free falls and splash! He lands on chest-deep water, so hard he hits the bottom, but comes up standing on his feet, the glider leaving the power lines just as he was about to touch the water. As per Bambam, Patricia Letona was shouting warnings at pilots heading to land on what from above appeared a lovely short grass field.

2nd was the rescue deployment by German Navia. He had a collapse that could not get out after pressing hard on the speed bar.

Last but not least, the people that make it happen.

The amount of work behind this kind of event is huge. You can never organize a Class 1 Comp without having organized dozens of minor evens first and without a Team of well-oiled cogs in a complex mechanism, so let’s try and name a few of them:

Frank Brown, event Organiser:  Frank was not only the coolest, most calm and collected man around, he was also kind, generous with his time and the silent driving force behind it all. As if this was not enough, he goes out there and nearly wins the bloody thing! How does he do it?!?!  Not alone, that’s for sure. A great leader brings together a great crowd.

Net Barros, The City Mayor: Only in Brazil you will find such a simple, yet sophisticated, down to earth charisma bomb. Neto loves his people and unlike other City Mayors around the World, understood immediately the economic value brought to the city by a circus of over 150 foreigners coming, paying hotels, eating meals, buying clothes, sun cream, drinks, snacks, taxis, hair salons, presents to take back home, etc.  We all happily parted with many hundreds of dollars in these ten days and gladly so. But these kinds of competitions have got a multiplying effect. The pilots attending a Class 1 event or a PWC, for example, are local references for the sport when they head back home. Other pilots look up to them, other pilots follow their steps, more recreational pilots come back, just to fly the sites where ‘those pictures were taken’. The Paragliding community has a great combo in Frank and Neto, I’m sure between them they will be able to accomplish great things for Paragliding and the local community in this area.

Andy Cowley, FAI Rep: Andy came in representation of FAI. Former Hang Glider designer and manufacturer he has given and continues to give his dose of vital energy to the sport.  He was very quiet when not required to intervene, but he was also very assertive when needed, and he was needed.

Marcelo Ratis, Meet Director: With his Jumanji like sun hat and perfect American English he was a good host and a pleasure to hear every morning when giving us the weather briefing and task.

Dioclesio, retrieve coordinator:  He was the retrieve wizard, he knew exactly where everybody was at all times and a van would be shortly after landing no matter where the heck you had landed. There was something special about how this guy can lead a team of drivers on a radio to get to everyone on good time. That’s a skill that takes years and years to gain. His contribution, invaluable.

The people of Baixo Guando: We felt special here. “It is very simple: It is only with the heart that one can see rightly; what is essential is invisible to the eye”, wrote Antoine du Saint Exupery and he was right. Love, kindness, friendship is what makes life worthwhile, and the People of Baixo Guando gave us all of them. What a place!

You, the competitors: This is said too often it has turned out a must include in thanks speeches, BUT it is true. Without you, this isn’t happening, so… keep on coming back! And spread the love we’ve received far and wide. If you want to bring something back… bring more pilots.