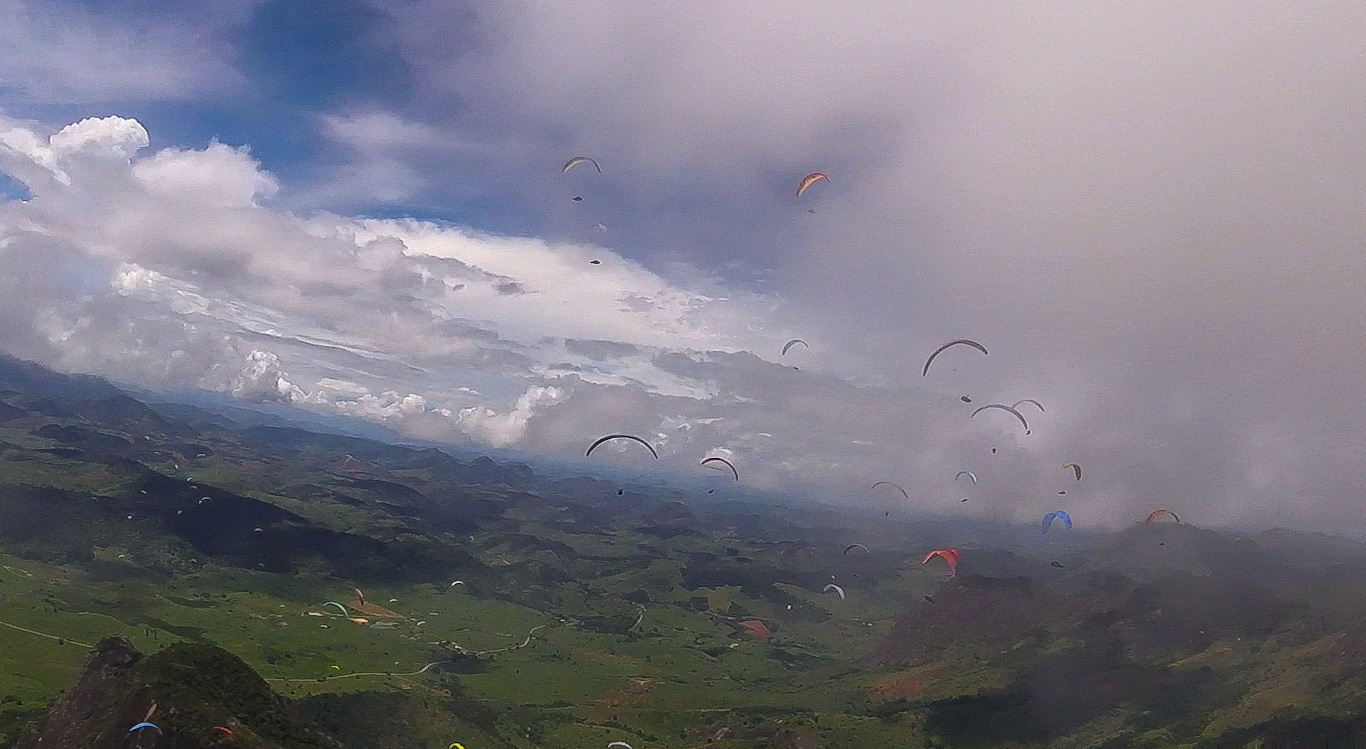 Second to last day and Baixo Guando finally starts to show its colours.  Gentle, tricky conditions lower down and some nice +3 +4 closer to the clouds.  Rain was almost always somewhere in the horizon and at times chasing the rear gaggle, but it never threatened the race track.

As pilots elbow their way up and hold on tight at the start, we are all pretty much well positioned when the flag goes down…full tilt towards the first Turn Point the opposite side of ‘the crater’.

The hot guns push forward, skip a first thermal and stop only in the city, others stay earlier trying to climb. First split of the group.

Then the pilots glide towards the crater and end up low after crossing the river, guys on top climbing one way, gaggle below, opposite way…until they meet…mayhem.  Nobody wants to give way, we all feel like we are right and thank God nobody has a gun onboard or I bet we would be shooting each other out of the sky instead of loosing the perfect dance we have finally started with this lovely, but pesky thermal.  The gaggle splitting again, some guys taking the top section of the thermal that breaks and drifts away as a bubble, the other half staying low, focusing on the lower parts of the thermal…mmm that reads funny but then we all have our preferences, some like the top bits, some like the bottom.

Pilots glide to the turn point, tag it and rush towards the new WP topping up height just before the second river crossing, everybody expects conditions to be very poor as soon as crossing the river and they are.

As the now massive gaggle gingerly progresses forwards,  winning a little, losing a little, they reach better ground and PUM! Straight up to cloud base.  The Goal line is now 15Km away…so close, yet so far.

Gleb, the Russian switches gear and as described by Alvaro Blas Lucero “ Alvarinho”, “ the Russian starts doing magic stuff”, climbing like something else and getting higher, faster than anyone, but wait a minute… something doesn’t feel right there at base…

Argentine’s Marcelo Vidal and Mike Trotta, decided not to waste time climbing…why would they?  They pick a line following a ridge lower down and straights it out soaring its slopes, until the very end of the ridge where the strongest thermal of the day awaits for them.  Some say “ El Negro”’s  steering wheel got locked some 30 Km from the end and the man just sniffed the most amazing line to catch everyone up.. He is making good ground…he is pulling an ace out of its sleeve and really putting himself in contention, now.  The Argentine David on a  Zeno lands a Knowck out Blow on the Russian Goliath on the Enzo….

In that simple act of glory ‘El Negro Vidal’ has accomplished many men’s life dream. Winning a task of a FAI Class 1 even. Because, ladies and gentleman, let me be clear, Is not an island full of beautiful women, or ‘La Ferrari’, Is not the Ducati V4 Panigale Superleggera or even finding a Para Shop that would part-ex your 3rd child for a new vario that we dream of, No. Given we were given the chance, we would choose to win that task!  Is because of that, we admire El Negro…because he represents, everything the average Paragliding racer would ever dream of.  Mr Vidal, we salute you Sir! You are the man. Amongst those pilots and the male overall winner of the task there was more glory to be had.  Annecy resident, ‘La Sambuy’ and ‘Gin Gliders’ sponsored Venezuelan, Joanna Di Grigoli won the day.  Joanna for those who don’t know her is one the best and most experienced female competition pilots in the world.  She really is a bit of a legend and someone who contributes to the sport in many ways, including translating the spanish version of Cross Country magazine and being a fantastic role model.  We have not spoken to Joanna yet as the last two days have flown by and she was bsy with commitments, but we will catch up with her soon, perhaps at her home in France.

Last, our compliments to the 50+ pilots in Goal today!

I ended up 2.5 Km from Goal despite being at cloudbase 10Km from the end…somehow I thought it made sense to risk it all to be 50th in goal instead of 53rd and went for a Kamikaze , worst possible line glide, full bar to the ground.

If you thought that was bad judgment you are wrong…it was about to get a lot worst… with 25mt agl I had to decide if landing next to the main road or take a glide  100mt longer, across a stream (river) of unknown depth with a tall grass, in the off chance I was the first person in history to recover from that height..over water.  I landed on the opposite shore. It took me 2 hrs of walking, wading and eventually swimming with my kit to get back to a place where I could get rescued from…all of this without water, at 35ºC...

I had ofcourse done my best to get rid of weight since my previous day, I lost 4 kg of essentials which helped me today but that included getting rid of drinking water am afraid (don’t do it).  The things we do for racing… The amount we push… is ridiculous sometimes but is not the racing to be blamed, is the sack of potatos hanging under the Paraglider. This is who we are.  If you race, you race to win or trying at least.