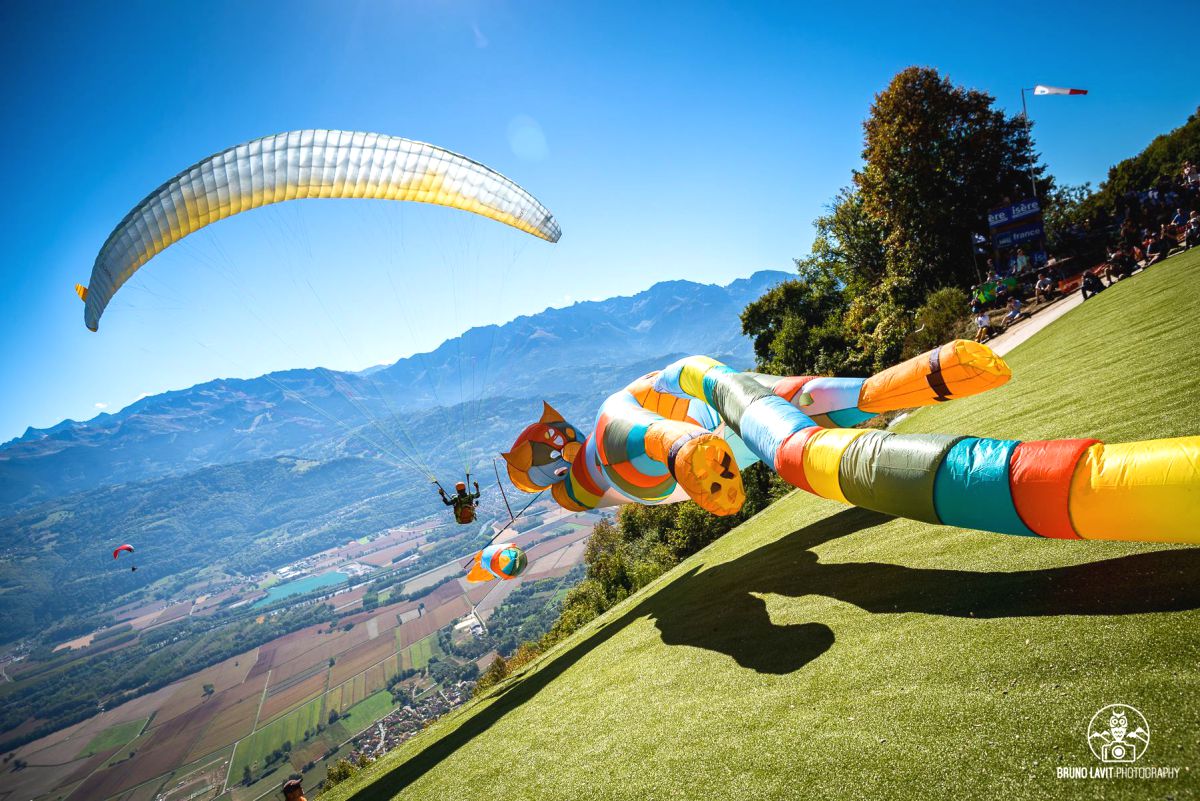 With high temperatures and the sun shining during the 4 days -with only a few moments of clouds and rain on Friday- the largest event dedicated to our sports in the world, the Coupe Icare, deployed all its splendor to more than 90000 spectators who visited the small alpine village of St Hilaire du Touvet (France) between September 20 and 23.

Once again, the joyful and carefree style that is trademark of this event left us with a wide mix of emotions, from the pure adrenaline of the Acro shows, the wingsuit jumpers that rushed over the heads of the public at the North takeoff or the awesome display of the airplanes of the French Army, to the laughs and amusement of the iCarnaval of flying disguises or the street performers, not forgetting the beauty and colours of both the huge hot-air balloons in the still morning air and the paper balloons that lighted the skies of St Hilaire in the night. All that, in the incomparable scenery of the Natural Park and mountain range of the Chartreuse, facing the broad valley of Gresivaudan, at the north of Grenoble.

The Coupe Icare is also the meeting point for nearly all paraglider and paramotor manufacturers, who present their new products for the coming season at the big trade show. At Ojovolador we had the opportunity to talk to many of them and see what they are working on, we will tell you one by one in separate reports. The film festival is one of the biggest sub-events of the Coupe Icare, and every year dozens of productions focused on light flight and air are submitted to the contest. This year, the Icares du Cinema celebrated its 36th edition with 91 films in competition, of which 15 were selected for the night projections and 28 for the OFF sessions in the mornings, in the large movie theatre set up next to the South takeoff. Our Ojovolador.com representative, Carmine Panettiere, was a member of the jury who had the difficult task of choosing the best films of this year, which were:

Favorite Off Icare: WE ARE THE ROVERS, NORWAY, de Antonin Michaud-Soret
Icare of the Press: SURF THE LINE, de Jérémy Frey

There was a record number of participants eager to take off with their attractive flying costumes this year, a total of 219 people flying (pilots and passengers) on paragliders and hang gliders. Although on Saturday afternoon the costume event had to be suspended due to the difficult wind conditions, finally on Sunday morning the participants offered a fun show to the about 30,000 spectators present. The winners were:

Paraglider sponsored:
1- La batucada Ziriguidoum
2- Who is getting married?

The international paramotor race took off once again at the Coupe Icare this year, with all its ingredients for success: speed, precision, beautiful low-level glides and a lot of excitement to entertain more and more enthusiastic spectators. This year’s winners were:

For sixth consecutive year, this prize was awarded in memory of the inventor of the human catapult for parachutists. In this edition of the Coupe Icare two inventions were chosen to share the prize: the RAST technology that German manufacturer Swing are introducing in their paragliders, which helps maintain the internal pressure stable in any circumstance -we will tell you in detail what it is and how it works on a separate piece with a video with Max Poehlman, from Swing-, and the hot-air balloon powered by electric motor of FlyDoo. In this video Leandro Corradini shows it to us and explains what it is (in Spanish):

For next year, the organization of the Coupe Icare promised that the 46th edition will be “even more exceptional than usual” as for the first time the focus and celebrations will be centred around the figure of Leonardo de Vinci, commemorating 500 years since the passing of the great Italian genius and artist.

*Stay tuned for more paragliding and paramotor news from the Coupe Icare 2018 that we will post here soon.