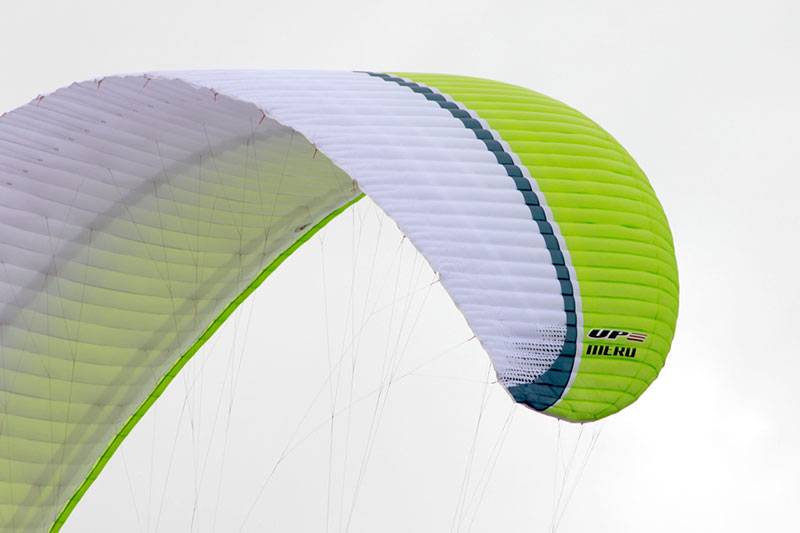 UP’s first 2-line Serial class glider, the Meru, has aspect ratio of 6.9 points (5.3 projected) and 84 cells; it is aimed at ambitious XC flights and competition in its category. This new model wants to find its niche in one of the most demanding classes, in which gliders certified EN D fly nearly as much as pure competition (CCC) ones.

The Meru is available in three sizes: SM, M and L, ranging from 90 to 130 Kg of total load in flight.

Different points of view for a conclusion:

For this review, Ojovolador.com had the opportunity to fly a preseries of the size M –if a bit overweight- in November 2017. We also had the collaboration of two good pilots to test the SM size: Jean Marc Malhonda, expert pilot with extensive experience flying serial and competition gliders, and Enrique Santamaria, instructor and expert pilot who regularly flies in the Sport class and who took the controls of a 2-liner for the first time.

But the best for our analysis was that we were able to compare and assess Meru’s performance during the Open FAI 2 and Spanish Paragliding Nationals 2018, competition in which world class top pilot Ernesto Hinestroza took the new UP glider to the top of the Serial class podium. The Meru arrives in a large and long box, like a broad and relaxed king, giving a clear message: This wing must be well looked after. The initial inspection made a good impression on us. The Meru comes with its rucksack, some tapes, the cell-by-cell folding bag, manual, repair kit and some interesting souvenirs like a wrench for the carabiners that we can fit on our keychain.

After laying the Meru out we can see a series of interesting details:

Leading edge with rods, shark nose, and “double-3d” panel shaping, responsible for the smooth and wrinkle free leading edge and topsail. It also incorporates rods both on the outer and inner sail to improve aerodynamics The trailing edge has mini ribs and the brake hang points are “pleated”, which translates in a clean brake line and a precise operation.and collapse resistance.

The lines hang points are minimalist to avoid parasitic resistances and to achieve better aerodynamics.

The two-line risers are minimalist and have a speed system that changes the angle of attack on the center and the tips of the wing. The only thing that didn’t convince me much was the forwarding of the outer line of the A riser to the wing tip. It works well mechanically, but the maillon and the rubber band that holds the line on place are “oversized” and the rubber (O-ring) goes slack until it gains tension. The Meru is an “easy” glider within the Serial class and this is noticeable from the inflation phase. It is amazing to see the evolution of paragliders, and how these new EN D models are now able to challenge top competition gliders, maintaining a good-natured touch along with predictable and manageable response. The Meru hardly shoots forward or collapses during the inflation process. To make it happen you must be clueless on a very thermal day.

We must bear in mind that, as in all high aspect ratio wings, there is a slight tendency for the tips to raise first and, therefore, it is best to handle inflation with the centerlines and even array the glider in crescent before.

The inflation manoeuvre is easily controlled; the glider rises progressively and just a gesture will be enough to nail it over the pilot’s head. Then, a couple of steps with decision, and bingo! You are airborne.

Smooth and gracious in flight There’s no doubt, this is a cruising machine. The feeling of performance is total, but the Meru also feels smooth and full of inner pressure. The wing feels harmonious and works more in block than, for example, the Trango XRace.

This Meru performs fluently, you don’t really notice that you are flying a glider of 6.9 aspect ratio except for the elegance in the way to turn. When you fly it, everything seems easy! Maybe too easy..?

In my case, already used to flying my competition CCC wing, the Boomerang 11 -perhaps the most sensitive and lively of the 2017-2018 season- the Meru felt as comforting and easy as an EN B glider… The handling of the Meru has the true UP feeling; whoever comes from an XC Summit or Trango XC will know what I mean. The turn is fully adjustable, the wing transmits what happens in the air and it is easy to find the cores. More than searching for the thermal core, you let yourself go…

The Meru offers the pilot the chance to develop different forms of handling. The brake is short, direct and very precise, but without feeling dry or soggy. Once you get the hang of it, which is not difficult, you can make the Meru turn very flat or, as I like it, in an unbeatable “screw” turn to center the narrower cores and get shot up in the thermal core. And that’s how we saw Ernesto Hinestrosa, climbing really fast in the centre of the flock during the Spanish Nats 2018.

The best way is to fly with speed to take advantage of the surges and make the glider “bite” where we want.

If occasionally or in a premeditated way we tighten too much, the Meru warns; the “semi-wings” are delayed a little but you will hardly stall the glider. It’s a pleasure to explore the limits with this wing. The best glide ratio, as usual, was found stepping on the first third of the speed bar. As far as pure gliding is concerned, the Meru is very similar to current competition and serial wings, like the Ozone Zeno or the recently appeared Flow XC Racer, i.e., around 12 points. These three models are practically “paired” in glide, and the small variations that we can see will be more a question of wing load, aerodynamics and/or piloting technique.

Then, when it’s time to fly faster, we can say that the Meru is very comfortable to fly.

The main advantage of the Meru is a good feeling and comfort in accelerated flight, and the good balance of speed, safety and performance it offers. The Meru’s riser system is accurate and effective, once in accelerated flight you hold to the handles of the B risers, correcting and bouncing to optimize the glides. The “bouncing” technique is a modern and much more effective version than what we used to call “dolphining”. With this technique, you take advantage of the turbulence you may find on transitions, turning your glide into height. If you use this technique well, you can extend your glide lines in an amazing way.

As for speed, and talking about what we could observe, the thing goes roughly like this: Using full speed bar, the Meru goes one or two km/h faster than the Zeno and, in turn, it is beaten by the XC Racer. The main advantage of the Meru is a good feeling and comfort in accelerated flight, and the good balance of speed, safety and performance it offers. We had zero incidents in our test flights. This glider is resistant to collapses, both in turns and during accelerated flight.

When we turn in a thermal, the Meru keeps a high level of pressure, and if we enter a turbulent area we confirm that it has a good-natured behaviour, considering its category, and it is damped in its axes. If one side of the wing loses pressure, it is enough to counter steer the exterior side and the glider will stay immutable. It really boasts a good job of interior design, with a lot of pressure.

We tried some asymmetric collapses and reactions were not violent; the center of the wing maintains a lot of pressure and we just need some active piloting to control it, as I said before. Compared to a CCC, this paraglider feels like an EN B for progression. This 2-line EN D is truly the most docile and accessible of the ones we have tested, and it would be the most advisable option to progress from an EN C glider or a 3-line EN D.

For example, if you come from a Trango XC3 or a Trango Xrace -which I have flown- I can say that the progression will be very natural, and, in some respects, flying will be even easier. For instance, the Meru is a glider that works more in a block and offers more pressure in the wing tips.

That said, we must not forget that increased performance and, especially, higher speed means more intense responses if the paraglider gets misconfigured.

The Meru is a glider suitable for expert pilots, and one of the best options to progress from an EN C or 3-line EN D for those who are looking for maximum performance.

In our opinion, the Meru is possibly one of the most attractive gliders to fly XC at the highest level. The balance of performance, handling, safety and comfort places it as one of the best choices for ambitious pilots who want to fly far and long.

And of course, as demonstrated in the Spanish Open, the Meru is also an effective option to compete in the Serial class. The new EN D 2-liner from UP offers a soft feel and responsiveness, giving the pilot a clear idea of what happens in the air.
The turning behaviour is probably its most attractive feature, as it is progressive and efficient to take the most of any kind of lift.
The glide ratio is at the high-end of the category, but the Meru also offers an extra spike of speed.
In our view, the Meru is a gentle and accessible 2-liner, being a perfect option for pilots who want to compete and fly XC with low stress, and also for pilots who come from the Sport class.