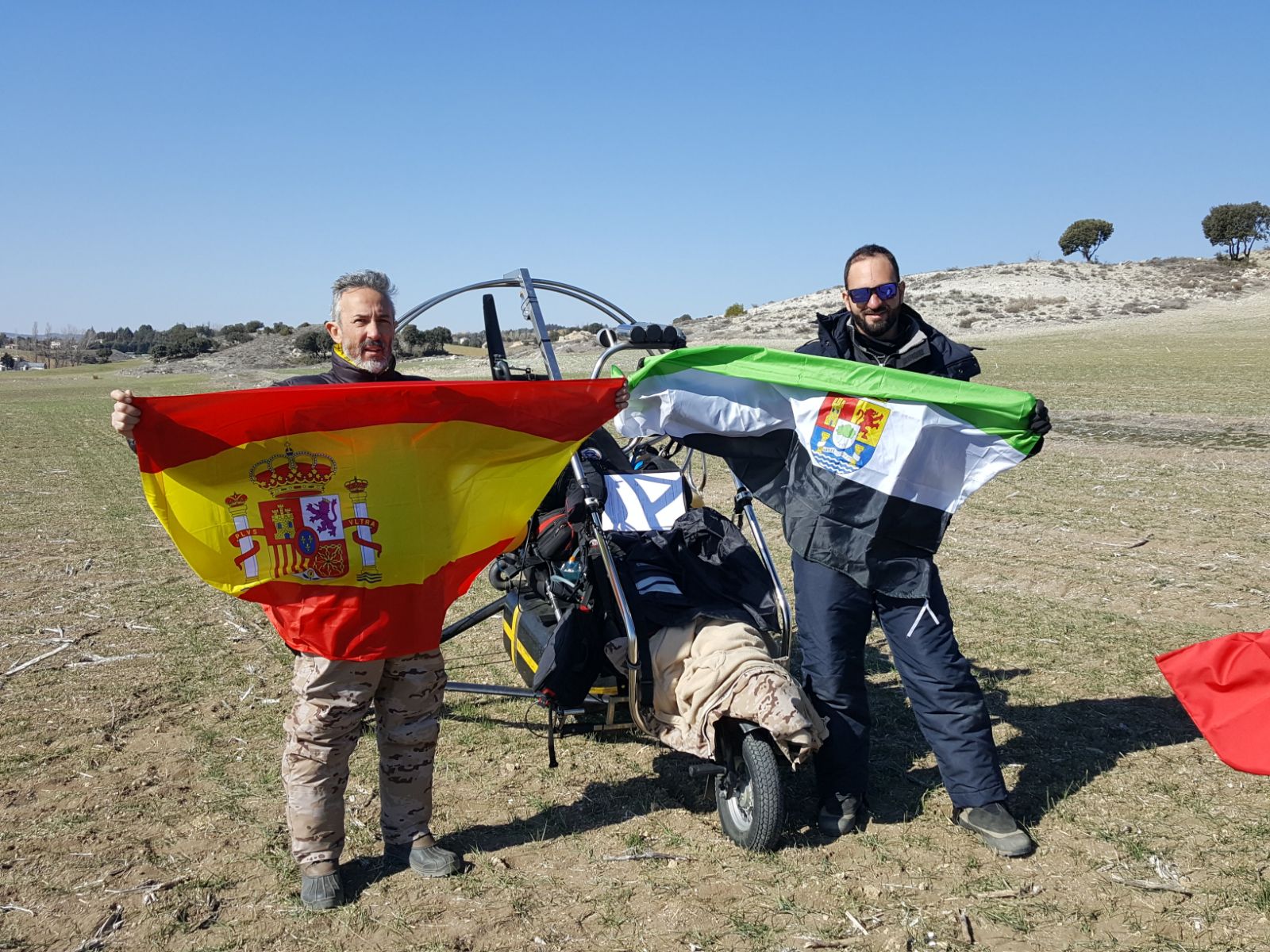 On Saturday 24 of February, pilot Andres Sanchez ‘Driu’ and co-pilot Vicente Mendoza flew 406.7 km in a tandem paratrike, the longest distance flown in the world up to now. The standing world record was at 291 km, set in 2005 by Russian pilot Nikolay Karabchuk. The pair took off at 8:15 from Zafra (Extremadura region), with a temperature of only 1ºC, and climbed to then continue in northeast direction for 6 hours to finally land near Cuenca (Castille-La Mancha region), with the record in their hands and still 25 litres of fuel in the tank.

As Driu told us, they had chosen the day to have a smooth winter flight, but they found the most active day of the cold season, which in other areas paragliding pilots used to do cross country flights of +100km. “We caught a +7 m/s climb that lifted us 100 meters without turning. The air was really bumpy, we were going through thermals all the time and with such a high load the surges were very strong”, he explains. Because of these turbulences, the copilot -an experienced flyer- got seriously airsick.

It wasn’t the only problem that the crew found. Due to the low temperatures Driu decided to wear two balaclavas, so the helmet was tight on his head but he did not manage to fasten the buckle. The turbulence and the wind then allied to blow the helmet off his head and send it straight to the engine… Fortunately, it did not hit the propeller and the GoPro camera attached to it was caught on the exhaust, where Driu could recover the helmet from, although the camera was melted by the heat ending up useless -and it is the reason why there are few images of the flight.

Additionally, they had cross wind during the entire journey; never were they able to fly in tail wind. As they had designed a route that dodged restricted airspace areas, they decided to stay in it -according to Driu, they had a corridor of about 20 km- so as not to risk getting into some CTR and losing the record if they modified the course.

The pilots wore Pitufly systems and diapers to urinate in flight, although that part also gave them more than a headache during the flight.

Near the Sierra of Cuenca and seeing that the conditions were aggressive and would probably get even worse above the mountains, Driu and Vicente decided to go to land with the goal already achieved. The remaining fuel in the tank would have allowed them to do about 200 km more, but that will be next time they say.

As for the flying gear, they chose a Hercules paraglider from Sol Paragliders because it offered them a better compromise between glide ratio and consumption. “Perhaps it is not such a fast glider, but it consumes little and then in turbulence I think it behaved much better than other wings would have done. The last two hours were of continuous active piloting”, says the pilot.

The paratrike, custom made for Driu from a Cosmos flexwing structure, is powered by a Rotax 532 engine, with 145cm propeller.

The team now prepares the paperwork to get the record officially approved by the FAI.