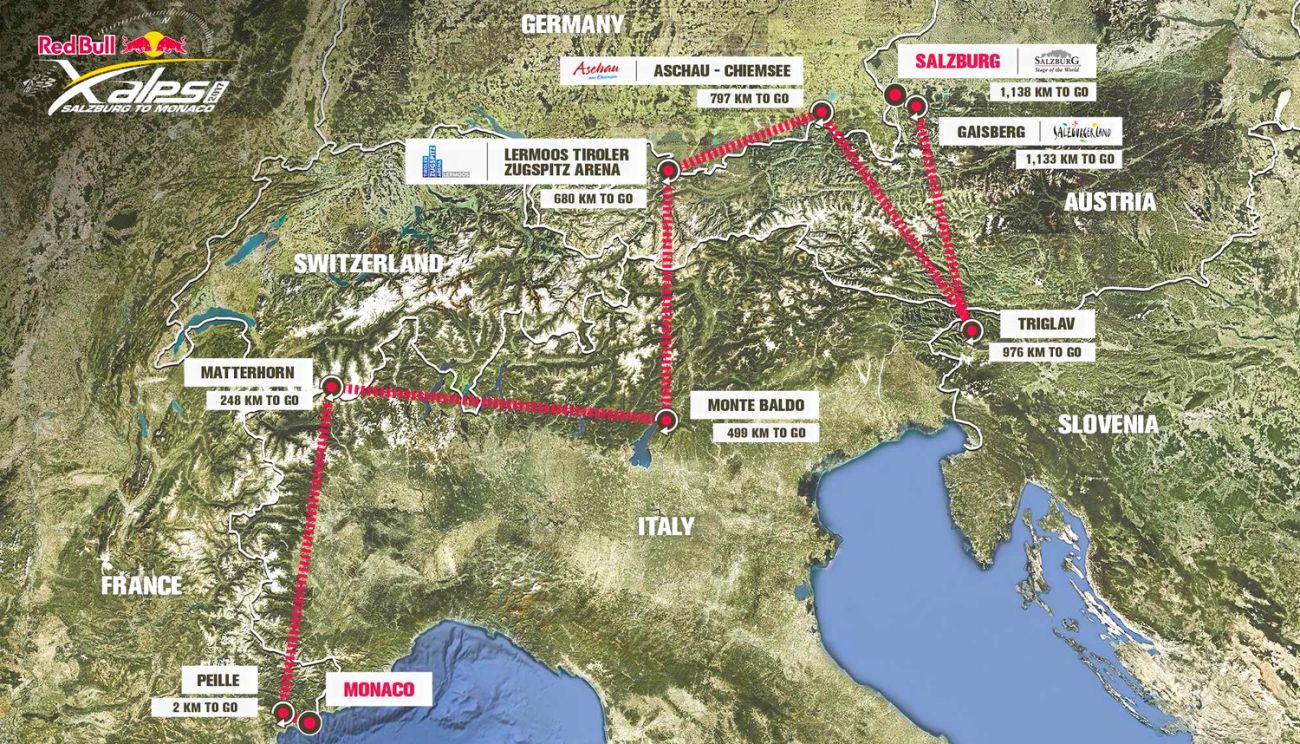 Racing a straight-line distance of 1,138km from Salzburg to Monaco, 32 world class athletes from 21 countries will hike and fly via 7 turnpoints in 7 different countries – including Austria, Germany, Italy, Switzerland, France and for the first time: Slovenia. “This exciting new development will make the world’s toughest adventure more challenging and more unpredictable than ever before”, say the organizers of the Red Bull X-Alps 2017.

The new Slovenian turnpoint will lead the participants to race along Europe’s largest mountain range and traverse it four times between the northern and southern fringes. The race will also feature 3 turnpoints fewer than in 2015.

Race director Christoph Weber says: “The distances between the turnpoints will be longer than in the last seven editions. Such a wide variety of potential routes comes with a whole new world of strategic possibilities that will push rookies and veterans alike to their very limits; both mentally and physically.”

The race starts at the historic Mozartplatz in Salzburg, Austria. From there, the athletes will run through the city and up the Gaisberg to Turnpoint 1, a spot with a scenic view above the Salzburger Land region that is expected to attract thousands of fans, to support the competitors as they set up their paragliders and embark on their first flight of the contest.

A gruelling 157km straight-line journey south through Austria will take them to Turnpoint 2, the Mangart paragliding launch pad on the edge of Triglav National Park in Slovenia. Triglav is the first Slovenian turnpoint to appear in the race and is the country’s highest mountain at 2,864m above sea level. Ulrich Grill, organizer of Red Bull X-Alps explains: “The new terrain around the Triglav Turnpoint will require some innovative new strategies that could make all the difference in the early stages of the race.”

Traveling northwest from Slovenia, the competitors will traverse the Austrian Alps for a second time to reach Turnpoint 3, Aschau-Chiemsee in Germany. Located at the foot of the Kampenwand in the picturesque municipality of Aschau im Chiemgau, the athletes will decide whether to continue west on foot, or climb upwards and take to the air.

Turnpoint 4 is the second Austrian turnpoint in the race and can be found in the village of Lermoos. Situated in the shadow of the Zugspitze, the almost 3000m mountain connects Austria to Germany and offers the athletes huge flying potential. The right thermals at the right time could give them a serious boost onto the next leg of their exhausting journey.

Pushing back south through the Alps to Italy, the athletes will find themselves at Turnpoint 5, nestled closely to Lake Garda by Monte Baldo. At this point, the competitors will have successfully passed the halfway mark; but with tired feet, aching muscles and 499km still to go, anything could happen. Who will hike around the lake and who will be brave enough to fly across it?

Turnpoint 6 lies 251km west at the Matterhorn in southern Switzerland, making it the longest stretch between two consecutive turnpoints in the race. If getting there isn’t hard enough, navigating around one of the highest summits in Europe certainly will be. The region is also a key strategic point in the race, as the athletes set off on the last quarter of their journey.

In a final push, the hungry competitors will battle it out over the remaining 246km to reach Turnpoint 7 in Peille, southeast France. Finally, the timer will stop, leaving the athletes to make the 2km victory flight over Monaco to the warm, blue waters of the Mediterranean Sea. Here, they will touch down in style on a landing float to celebrate the accomplishment and relief of completing the world’s toughest adventure race.

The new route for Red Bull X-Alps 2017 will be the most demanding in the race’s 14-year history. From now, the athletes have just three months to prepare for the enormous journey that lies ahead. Studying the geography of the route will go a long way, but to emerge victorious will take a whole new calibre of endurance and determination. There’s no telling who will take the title, but with some of the greatest athletes in the world, it will certainly be an adventure to remember.