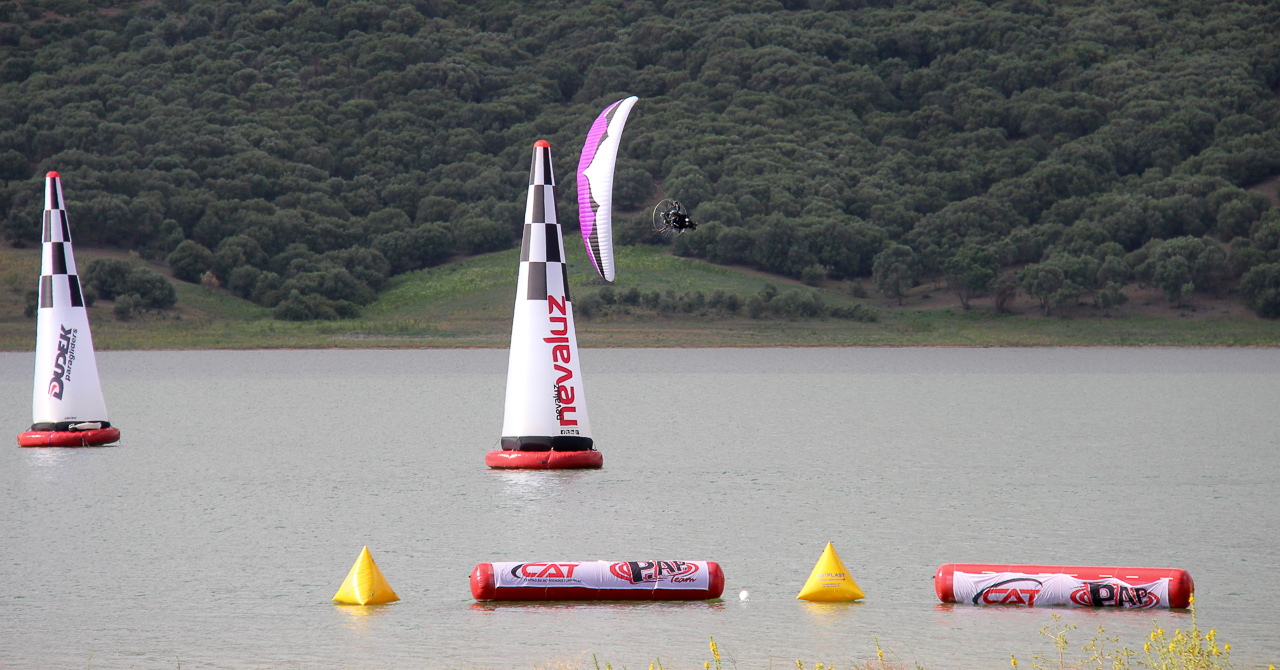 According to two members of the Spanish team, Karen Skinner and Ramón Morillas, the Organization was very good, as well as the place – Bornos – where every day they set up eight inflatable pylons on the water to allow for different circuits of between 3 and 8. The weather wasn’t bad, although the wind in the afternoons did not make it possible to fly other than free flights for those who could, leaving each morning for the competition tasks. Only one day had to be cancelled due to the wind, which almost swept the circuit, but finally on Thursday June 16 the first medals were defined, after the final tasks that included ground (water) spirals with  wingtip touch on the water and a 50-metres long swoop (foot drag on the water) that Mateos and Nico Aubert (4th) nailed.

“It has been shown that flying above water is the solution. There have been several incidents that would have been very serious over ground, but on water they are nothing more than some laughs, when someone falls after pulling a negative spin or having a collapse… me for example, my engine stopped and I went to the water, and that’s all”, says Ramon.

“The Championship has been super fought. Between the first and the second there was some difference, but then there were many pilots in very few tenths. For example, Nico Aubert managed to make a 1st in the qualifiers but that did not help him because then the qualifiers went on and in the final, in which only three pilots are classified, he didn’t make it and remained fourth.

In my case it was the opposite because with the trike I was making 5th, 4th… and at the end at the finals I concentrated, meditated, trained the task paths very well, and could put myself there among the 3 first. In the final with Bogdan and Alex they beat me… I beat them in age but they beat me in speed and execution of the tasks”, explains the former world champion, who came 14th this time in the footlaunch class. “Competing in two categories (footlaunch and paratrike) is very stressful because there is a task for one and another task for the other, and you have very little time to prepare them. I did it wrong only once when it was very turbulent and I had just done a run in footlaunch; I took my trike and I got lost… I’m happy with the result and how my gliders (Niviuk Doberman) are, as I have been working quite a lot on them and they are already at the level of all the competition wings: Nico proved it, and me too”.

Karen Skinner, one of the two women participating in this Championship and author of the pictures that go with this article, is enthusiastic about slalom over water: “I stopped participating in this type of competitions after the Spanish Championship 2014, first because I knew I didn’t have the level to do it, and the price of a mistake wrong is very high! I attended the WAG of Dubai (in December 2015) and now the Europeans; in the two championships I fell in the water by my mistake and both times I went out with a smile, simply because I did not suffer any harm”, she summarizes.

With respect to women, despite being only 2 this year, Karen says that Marie Liep (of the French team and 12th overall) is very strong and she will not go unnoticed: “Beware guys, because I believe that in a future she will be on the overall podium”.