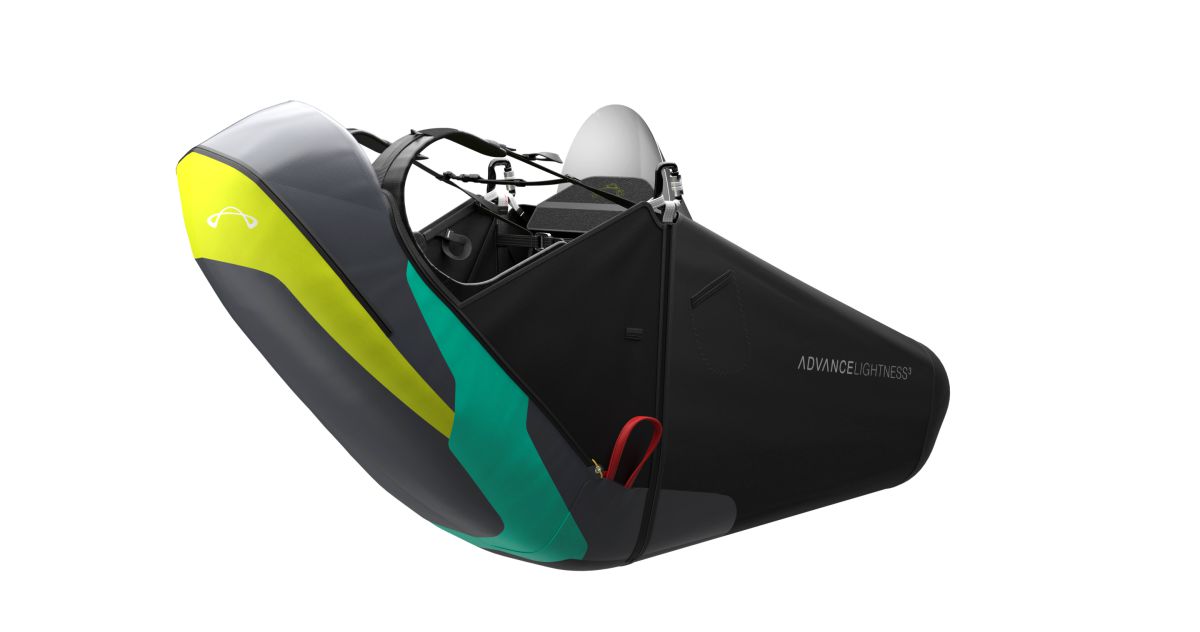 During the last Coupe Icare, Advance officially introduced the third generation of their lightweight cross-country harness, which incorporates a windshield in the fairing and offers a weight of around 2.5 kg. The Lightness 3 is the perfect complement for the Xi, Advance’s light high EN B glider launched last summer.

As explained to us by Simon Campiche of Advance, the Xi achieves its best performance with this harness, designed for long distance flights with the minimum possible weight.

Thanks to this, the pilot can carry a gear that altogether has a weight of around 8 kg and can fly him/her for many kilometres. For the more adventurous pilots, the Lightness 3 can be flown without the fairing and the back protection, thus further reducing the weight and size of the package.

The Lightness 3 has two main differences with respect to its predecessor. On one side, the hang point is now 4 cm higher, which gives greater stability to the harness making it more comfortable for the pilot. On the other, the Lightness 3 incorporates a new SAS Tec protection on the back, which is soft to the touch but it gets hard in case of an impact helping to dissipate the energy on the back. This protection is removable if you want to fly with the minimum.

In this video we show you the Lightness 3 in more detail:

The front fairing comes in two versions, a “normal” and a “light” one. Also new is the front windshield, which offers better aerodynamics and, therefore, a slight gain in performance, plus more comfort in flight as it protects the pilot’s face from the wind and the noise caused by it. The windshield can be removed as well.

Like its predecessor, the Lightness 3 comes with a compress bag to fold the glider compact, and the “very comfortable” Lightpack 3 rucksack. The official retail price will be 1590 euros, and it is expected to hit the market in December.

At Advance are very happy with the new Xi, which weighs 3.4 kg and has similarities to the Iota 2, their high performance EN B glider, although it has fewer cells, less internal diagonals and an optimized weight. According to Simon, they are getting very good feedback from the pilots who are flying it, for its good compromise between high performance and low weight.

The Xi is aimed at a broader pilot profile than the Iota 2, from pilots who seek maximum performance and high security, to those who like mountain adventures, hike&fly or bivouac flight. According to Simon, it is a very versatile wing that can take you on a 300 km flight as well as on a 3-day flying adventure in the mountains.

Regarding future developments, at Advance are already working in the ninth generation of the Epsilon, the low EN B glider of the house, which is expected to be ready for the spring of 2019.

At the Coupe Icare, Advance also presented the first edition of their magazine “Adventures Collection”, a compilation of 12 different flight adventures that go from the crossing of the Cordillera Blanca in Peru climbing and flying, to the feat of walking on a slackline held between two paragliders, and in between stories like a beautiful paramotor crossing in Bavaria. Real and exciting stories that want to inspire other Advance pilots in the world to go out in their own adventures, and tell it on social media with the hashtag #advancedadventures.