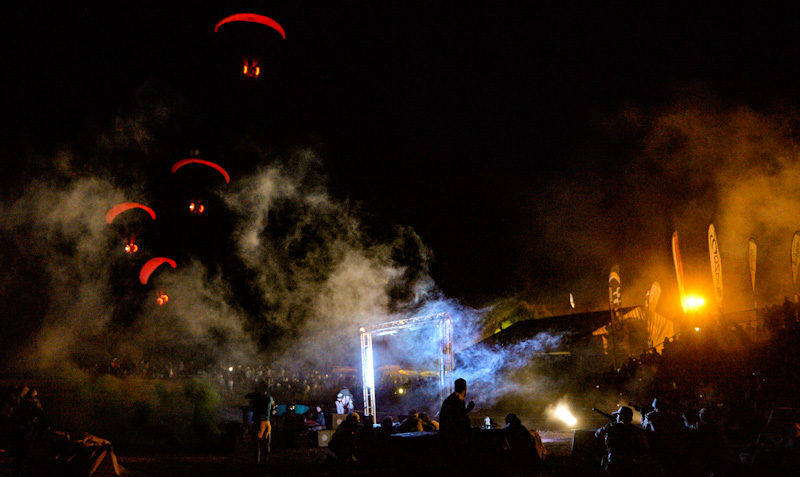 Twenty years is a long time and in the heat of this special anniversary, the organization of El Yelmo’s International Air Festival (FIA) made a big effort for this year’s intense edition that was visited by over 22 thousand people – the largest audience in its history, according to the organization-, between Friday May 31st and June 2nd 2019, with hundreds of pilots and many flying stars from over ten different countries.

Among this year’s novelties stood out the female participation in the event. For predominantly male sports like ours, it was a pleasure to see relevant paragliding and paramotoring women pilots from Spain and abroad flying together at the FIA, though this time they were forced to stay more on the ground than in the air due to the bad weather conditions.

The strong wind coming the wrong way made it impossible to fly Friday afternoon; and during Saturday, now more moderate, it offered small flying windows that were taken advantage by the most experienced paramotoring female pilots to present themselves in formation over the FIA premises: Karen Skinner, Emilia Plak, Lydia Jaecques and Helina Nieminen. Sunday, with even milder conditions, we were able to see the girls displaying a bit more action, this time joined by the pilot from Cordoba Vicky Ortega and a few others who added their presence to the morning demonstration.

Paramotoring, the star of the 2019 FIA

Without a doubt, paramotoring delivered a great part of the show of the XX FIA El Yelmo. Besides the formation flights, we witnessed an array of freestyle and acro maneuvers performed by outstanding pilots, and had the cherry on top Saturday night with the amazing night show “Battle of the FIA Planet”.

After an intro that was filled with suspense and with almost 40 actors on foot characterized as rebels and soldiers of the galactic empire – princess Leia included -, the paramotors came flying into action fully lit as space crafts, illuminating the dark sky over the FIA premises with rays, lights and fireworks.

The pilots delivered an exceptional performance during those flights, the show required high expertise and synchronicity for their formation appearances, the acrobatic maneuvers and the use of the lights and the fire during the aerial combats. Maybe the end wasn’t as happy as we would have liked, but we all know Star Wars will continue as long as the force is with us… A great staging made by Ramon Lopez himself, the director of the FIA, who has a vast technical background in paramotoring exhibitions together with the Paraddax Team and the pilots Javier Sierra, Ramón Morillas, Vicente Palmero, Nicolas Aubert, David Tejeiro, Paco Díaz.

Though paramotoring had a lead part, the festival wasn’t short of paragliding acro exhibitions and jumps from paratrikes in D-bag and BASE modes that were carried out by great veteran names like Raul Rodriguez or Veso Ovcharov, and young talents like Pablo Andreu and the brothers David and Manu Tejeiro, the ‘Malaguitas’.

Over the course of the weekend, we were also able to see other flying devices like the great AB 212 helicopter of the army – over 17 meters long- making different passes and even simulating a rescue maneuver at the landing site of the festival, and the drones that competed in one of the stages of the Drone World Cup live, also in the premises.

It was a cheerful XXth FICA Air Film Festival with 23 movies competing from 10 different countries that we were able to enjoy, during the day and at night, in the theater room located at the Sports Center. The Best Film was the French production “B’Hike & Base” directed by Jeremy Condaimne.

The Sport Center also held interesting talksthis year, the first was with the adventurer and paramotor pilot from Brazil Lu Mariniwho presented at the FICA his documentary “The Tragedy of the Doce River” and talked about his work to raise awareness regarding environmental problems from the air perspective via his films and his TV show. Karen Skinner, the record-holder, air photographer and member of the Spanish Paramotoring Team in a number of occasions, talked to us about her latest distance record over a triangle, and about all the things you need to achieve such goals. Finally, the renowned designer and founder of the paraglider brand BGD, also former paragliding world champion, columnist and writer, Bruce Goldsmith, he talked about XC flying and how to develop the abilities required to go further: via ground-handling on a permanent basis and then viewing everything around us during flight. He also talked about safety and the relevance of SIV courses. The talks were witnessed with great interest by dozens of pilots Saturday and Sunday.

The Fair was also animated by the presence of great paragliding brands like Niviuk and relevant importers like Kasana(Gin, BGD, Supair), Draco (Advance, ITV) and Paramotor Barcelona (Swing, Paramotors Air Conception). Since little flying was done, most pilots had time on the ground to check out the products of the different brands, watch movies or go to the talks, shows and concerts held at the food tent.

The Festival closed with the award ceremonies to the different activities and competitions that had taken place over the weekend, which weren’t few. The 12th edition of the FIA’s classic Paramountain race ended with several paragliding descends from El Yelmo when the East wind eased enough to allow Sunday morning take-offs. The winner of the race was Manuel Benavidez.

El Yelmo XC Open closed with three tasks completed, more than ten flights registering +200 km –the longest, 265 km marked by Lorenzo Nadali-. And, as usual, a good amount of personal records were achieved by the over 50 pilots participating in the event, despite the Spanish maze of air restrictions that complicated every one. Finally, different penalties kept changing the podium positions which ended with Stan Radzikowski in the 1st place with a Gin Bonanza 2 (EN C), Daniel Crespo 2nd with his Gin Boomerang 11 (CCC) and Alex Loyarte 3rd with an Ozone Zeno (EN D). The 1st woman was Laura Puente.

One of the most emotional moments for Ojovolador was the recognition given to our test pilot, reporter, vlogger and founder, Daniel Crespo, who left his footprints at the Center of Air and Flight Interpretation of El Ojuelo, side by side to great paragliding names such as the adventurer and record holder Antoine Girard, the “father” of Acro, Raul Rodriguez and the multifaceted Swiss pilot, Andy Hediger. In his extensive sport career, Daniel has achieved the title of Paratrike World Champion, several medals with the Spanish Paramotoring Team and was the Spanish Paragliding Champion 2018, also two times, in 2016 and 2018, champion of Spanish Tandem Paragliding. Since 2002, Daniel works in the communication of flying news and events at Ojovolador.com. Every year, the FIA decorates a personality of the flying world, who leaves his footprints in this little “Promenade of Air Stars”.

With twenty celebrations already, the International Air Festival El Yelmo has consolidated itself as one of the “must” events of the calendar and an international reference. It’s always a pleasure to meet with old and new friends there, besides feeling the love the organization puts into producing this great meeting that celebrates all flying things via films, hike&fly, acro, freestyle and with the technical talks given by great personalities, the professionals presenting their novelties at the fair and El Yelmo’s environment as a whole. See you in 2020. We’ll be back!

Open your mind – If it is flyable, then FLY!