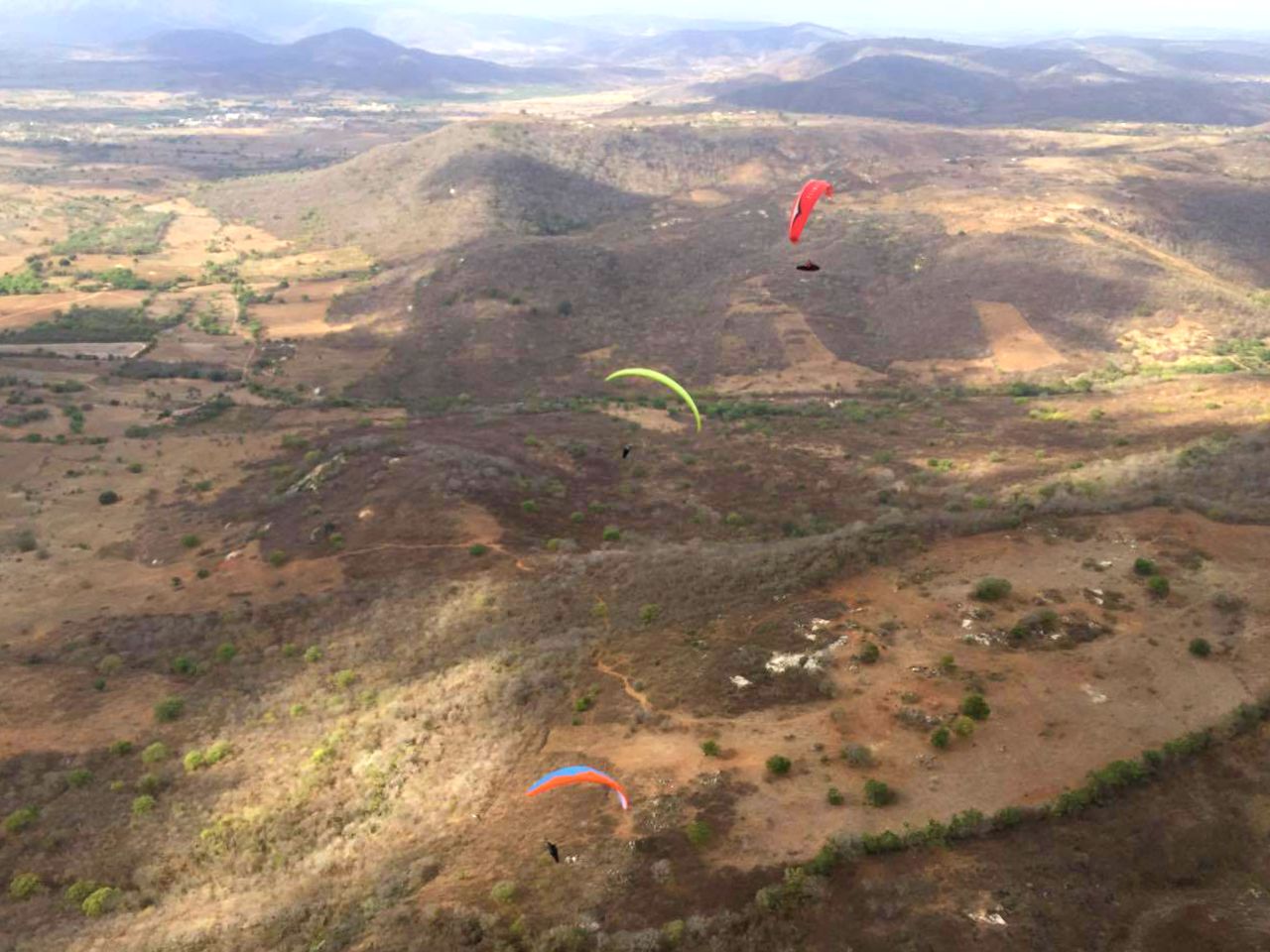 On October 13, 2016, three Brazilian pilots amazed the flying world (again) by smashing the paragliding world distance record with a 564,3 km flight in the northeast of their country: 50 km more than the previous record achieved in 2015 by one of them, Donizete Lemos, along with two other pilots. The new mark set by Lemos, Samuel Nascimento and Rafael Saladini, brings the possibility of reaching 600 km with our light aircrafts closer. But beating such a record is a feat that requires a lot of planning, studying the conditions, training and perseverance, in addition to pilot’s talent. Here’s the account of that happy day by one of the heroes in paragliding history, Donizete Lemos:

“My team formed by Marcelo Prieto, Samuel Nascimento, Frank Brown, Rafael Saladini and me, are in constant search to increase the paragliding world record of distance. In 2014, I took off from Tacima, Paraiba (Brazil) to cover 478 km, South America’s record; this flight done partly with Samuel Nascimento, ended up producing the feeling that it would be possible to fly over 500 km in the Brazilian Sertao. Already in 2015, the entire team did some attempts. And we managed to beat the previous world record -which was 502 kilometers- flying 514 km, the current paragliding world record of distance. The wave of good conditions still allowed us to perform another flight of 513 km during the same season.

In the record beaten in 2015 by Marcelo Prieto, Frank Brown and me, in both flights, we had the feeling that we could increase this mark, since in some moments we clearly saw that we were not flying in the best conditions.

Then now in 2016 we planned to fly 530 km. We are here in Araruna, near the takeoff site, since October 5th and waiting for good days to attempt a record flight again.

Here from this take-off we don’t have the same flight conditions consistency as in Quixada, in the State of Ceara, because sometimes we have rains brought by the moisture coming in from the Atlantic Ocean that make launching impossible. Or days with wind of up to 45 km/h as early as 7:00 a.m. Therefore, it is an area with substantially lower flight reliability than Quixada, but if the proper day comes it is possible to fly great distances.

On Thursday 13 of October we went to the takeoff early; the day did not promise much because there was intense rain in the region on the day before, but we took off early all together. We started in very weak conditions in the morning, but already with signs of improvement for the day.

By km 30, we lost two important pilots who ended up staying low and landing, Frank Brown and Marcelo Prieto, who have given us all their experience and knowledge to fly in the Sertao. But even from the ground, Marcelo Prieto (Cecéu) encouraged us and warned us not to lose the opportunity, because this was the day to beat the previous record. We went on flying, Rafael Saladini and I with Ozone Enzo2 paragliders, and Samuel Nascimento with a Gin Boomerang 10.

We started to control our goals to achieve the objective: already on the km 100 we were 2 km above the partial goal. This encouraged us because we were doing a good job as a team, we continued speeding up climbs and lines, and in the second partial goal we were ahead by 22 km that made us very confident to beat the record. We went on with the same efficiency and on the km 300, third partial goal, we kept the 22 km of advantage. We continued taking advantage of the conditions that marked our route with good clouds.

Final glide to the world record of 564,3 km. Video by Samuel Nascimento.

By the km 400, fourth partial goal, we had 40 km of advantage in relation to the previous record. This was significant because we were flying over Quixada with beautiful clouds and an amazing view of the monoliths. From there until the end of the flight it was all about enjoying the end of the day and taking advantage of the present. With high cloudbase, we got good transitions and kept the advantage. Finally, on the 512 km mark we caught a thermal of 2.5 m/s that secured the record for us. From then on it was pure joy and a sense of accomplishment.

It was a fantastic flight that shows the strength of the team. 564,3 km flown in 11:48 h. Special thanks to the masters Ceceu and Frank, great friends, and to Rafael and Samuel, partners in this journey”. D.L.