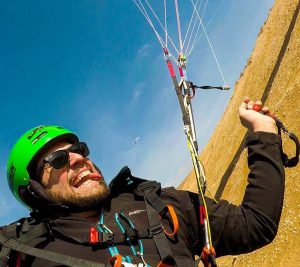 “West Ride Story” is the last video made by this French talent who loves to share his passion for flying with the world. Acro, waggas and proximity flying are his things, nicely shot and touched with a bit of sense of humour, as things don’t always turn out as perfect as you see on most videos: the fails at the end are a nice reminder of this.

After enjoying a number of productions made by Laurent, we decided to let him introduce himself, his motivations, and this last video:

I come from France and I fly since around ten years. I come from the Alps but I live not too far from the sea, and I love to play with strong wind in the French coasts. I began to make videos when we flew together with my friends. At the beginning it was just to have fun, and they were funny videos with no artistic research on them. As my paragliding skills where growing, I began to learn how to film, edit and play with images. In the last 5 years, I love to share my two passions: flying and editing.

I love how Danny Macaskill makes his films, the way to edit and the global spirit of his work, it’s inspiring me a lot on how I make films. A lot of other things inspired me in the past years: Tom Wallisch (imagination), Candide Thovex, Jason Paul…. My favourite type of flying is waggas, “acrobatic proximity paragliding”…. but not as an “extreme” sport but as a childhood dream. Do you remember when you were young when you wanted to fly everywhere and play with everything? That’s what I love to do with my paraglider! It’s my way to be free!

For this film, West Ride Story, we went in the west coast of France (North, Picardie, Normandie, Cotentin) and Morocco, with the great Quentin Chaumy to film in 2017. I wanted to show my past year not as a ‘best of’ but as one day, one nice flying day, one movement, of course with nice games at the beginning and…. what could happen when you want to play at the end! We did not want to make a film that shows big skills but a pilot having fun and being free. Everybody can be this free pilot with his childhood dream!