Home Blogs Flying a 193km FAI Triangle in the Alps

The Mistral winds had just passed and it was looking to be a very good day to fly. On Thursday night I had planned a trip to Chamonix to fly over the weekend around the highest mountains of Europe. I was hungry for big distances. Arna Goldsmith suggested that I should have a stop-over in Laragne-Montéglin, France, as it is about half way to Chamonix and she knew the place as an epic flying site. She lived and flew there for several years. Once deciding on location, I asked [former Paragliding World Champion, and BGD founder and designer] Bruce Goldsmith if he knows the area (of course he does, he has been flying around this part of the world for past ~20 years). We talked for a while and came up with the plan for a 180 km triangle. Bruce has flown all parts of the triangle over the years, he gave me some very good advice for tricky spots, hard crossings, conversions, and we also talked about the local valley systems. I took to Google Maps to get GPS coordinates for all of the turn points and mountain tops that I thought of gliding past along the way.

I was well prepared and the day was looking to be an amazing one. I got up early, prepared the gear and set off to the hill. While waiting for the day to pick up. I met some pilots on the take-off who suggested that heading West early is a good idea, as the ridge works great with the South wind. I thought about it, looked around, talked with Arna on the phone and decided to extend the triangle to over 200 km.


A local school had some training flights for students, which was a great indication for me to see how the day is progressing, slowly they were getting more and more lifty air. There was not a single cloud in the sky. Not even the smallest one. I had to rely on every bird I saw and every student glider that was popping off the hill. Just before noon I decided to go for it.

Partly because I was bored of sitting around and partly because I thought it is time. As it turned out later on, after the flight, the rest of the pilots who waited a bit longer, had to wait another half an hour to take off. Some North wind came along to disturb them.  I was pleased to know that my first decision of the flight, the take-off, was already a successful one.

I got into thermal pretty fast, took it up to just about 1000 meters above the ground and decided to go fast. The day seemed to be on and I thought that I had taken off too late. So I started to push on the bar right from the start – “No more wasting time, buddy. It’s time to race”, I motivated myself. I was right, the day was on! Next thermal I took to over 1600 meters above the ground and 2700 above the sea level. Now I was almost full bar on the lovely Diva and clocking 55-60 km/h with a lite cross wind. Diva didn’t mind one bit. Half an hour later I was 16 km West of the take-off I decided to turn around and start heading North.

The first leg of the triangle towards North was going really well till I almost landed at the end of the valley. Winds had turned from South to WNW, I did notice on my last climb that I was drifting with a WNW wind, but I thought that it would be only a problem at altitude.

That local valley system down low would still blow South. The wind up high turned out to be creating some weird air at the end of the valley and I almost landed, I got down to 200 meters above the valley floor. “Not again!” I looked quick at the KM flown and it was at my 33 km mark, it seems to be a distance that I land out a lot.  I worked hard, there was no way I’m giving up now, concentrated on every single move of the glider, I didn’t touch the brakes almost at all, used every little lift I could and managed to climb out. I was ecstatic. “No more low flying, buddy!” I mentored myself.

I drifted with the wind to the next crossing to connect with the “Beautiful Ridge” that’s right North of Gap and it ends at Corps. I knew the moment I will get close to it it will work. There was still not a single cloud in the sky and the climbs were getting to over 3300 meters.

I just went for it as fast as I could, took a climb to 3333 meters (I know, cool number!) and went for an almost straight glide across the stunning ridge. I was making up for lost time. 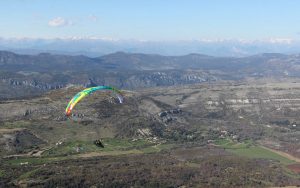 At the end of the ridge, being in the racing mode, I didn’t climb out enough. I started my glide over at 2760m. It wasn’t a big glide and there was a cross wind, but it was a touch too low.  I started to realize that the “Teletubby land” (Bruce calls these hills Teletubby land, because they are green like in the TV show) wasn’t going to be a great place to jump to. I had a bit of a dialog going on here: “The Teletubby land looks pretty crap, I probably should jump more downwind, Fuck man, should have climbed out to over 3200 meters, why are you being stupid right now? Ok, Bruce said the Teletubbies work great, I better go for them.”

Sure enough the Teletubby lands were crap, the winds were blowing NW not S (when Bruce talked about this spot he expected the wind to be South, and with South wind they work nice). I was once more down low and scratching for my life. I was determined, ain’t no way I am going down in a middle of a booming day and lose on a potentially biggest flight of my career. Once again worked overtime on getting myself back up.

Drifting with the wind in 0 and 0.5 m/s lift I managed to find a small thermal, climbed just enough to take on a small glide that I knew the Diva would take me over to. From here on, it was a speed way all the way crossing over the lake, I was back in a race mode.

Coring every thermal, pushing full bar and fighting the share layer turbulence I almost heard my Diva whisper to me – don’t  worry mate, I got this, just relax and enjoy the flight. And I did just that. She took care of me and I took care of having fun and relaxing. She’s by far the easiest two liner I have flown and she’s fast, really fast.

Rest of the flight, the last leg, was lighter lift and stronger head wind, Diva and I had an agreement and we managed to glide all the way back to where we started, just some 4 km away from the car that we left earlier that morning, closing a beautiful 193km triangle.

*See the tracklog on www.xcontest.org/

*This flight is a new national Latvian -and personal- record for Karlis, as well as the longest flight from the site of Chabre done on a paraglider, and the longest flight reported on XContest on April 21st, 2017. It was also good training for the next Paragliding World Championships of Italy, in July, where Karlis will represent his Nation for the first time.