Every now and again things just align in a way that, if one were disposed towards religion, could almost make you believe someone is looking out for you from above. For me, April 22-2016 was such a day.

I had promised to take someone sea kayaking, but only a few hours before we were planning to depart, he called to say that he had forgotten to inform his girlfriend, and that she had other plans – this was something which had been planned for months already, so I wasn’t very impressed with the guy’s organisational abilities. But as it turned out the day had dawned VERY flyable, something that was confirmed by a quick look on xcskies.com – so I wasn’t too upset after all, and when he called again in the morning to say that the girlfriend was now miraculously cooperating again, I wasn’t going to let that get in the way of a good day’s flying. So, I got in the car and drove to our national centre for hang- and paragliding, which is what we call our main towing paddock, situated smack in the middle of Jutland (Denmark), latter being that little peninsular appendix to Germany which you can just see on good maps of Europe… Jutland is the greatest landmass to fly the Danish flag, being some 350km from N to S, and about 80km from E to W. As usual when we speak of peninsulas, Jutland is surrounded by sea on almost all sides, but to the SE (as seen from the tow paddock anyway) there is but a narrow strait separating Jutland from my home island, known as Funen in English. 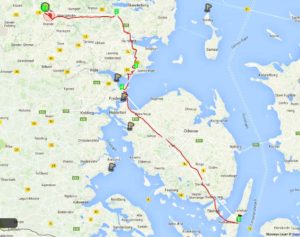 When you look at a map of Denmark and compare it to, say, a map of the Iberian Peninsula, you could be excused for thinking that sea breeze effects would normally make thermal flight here all but impossible, alas that isn’t the case. We can often fly all the way to the coast, and I have thermalled back up to cloudbase from low over the beach often enough to know that it is not just a freak incident – our thermals don’t seem to mind the sea so much, probably because there is so little land mass to generate sea breeze over that it doesn’t matter so much. That isn’t to say that we don’t get sea breezes – on good, light-wind days we often find that the day shuts down at the tow paddock around 3 o’clock in the afternoon – that is when the sea breeze front arrives, and then the pilots under tuition unpack their blobby little wings.

But if you want to go big you want to launch earlier than that anyway, preferably before noon, so on most days the sea breeze isn’t the problem it looks to be when you check the map. On this day, the winds were predicted to be Westerly, and to increase in strength during the day. Both predictions were spot-on, as it turned out.

Denmark is a small place, and we do have a lot of airports and aerodromes, considering the small size of the country. The national centre for hang-and paragliding is situated between two large chunks of no-fly TMA zones, and both extend E-W almost all the way across the peninsula. So any XC flight from there always begins with a 35-40 km leg straight E or W, and only then can one start to veer either N or S, depending on the plan for the day and the wind direction.

On this particular day, I had decided to try and fly home, meaning as soon as I had released the tow line I just let myself drift with anything I could find. Any pilot used to towing aloft will tell you how crucial that first climb is – you normally don’t get much more than 4-500m, and at that altitude it doesn’t take many mistakes to put you back on the deck. So I drifted, and then I drifted some more. Finally, the climb consolidated and took me to cloud base, at around 1550m. This is a good altitude for here, especially early in the day, and with a good drift caused by the wind it was clear that the day had potential. 1550m doesn’t sound like much, but with the deck being mostly at around sea level it still gives you at least some peace of mind before you go into desperate-almost-panic-mode at 250m above the relief.

The first 40-50km went very well, with no low saves and a fine ground speed, often going to more than 70km/h between thermals. At around 50 km / 1h from the towing paddock I was approaching the E coast fast, and I had made it around the NW corner of the Billund TMA, so I started veering S, essentially pointing my wing towards home. At this stage the winds had picked up somewhat, blowing some 25 km/h from WNW, meaning the drift in the thermals was considerable, and every thermal I took was taking me closer to the E coast. I crossed over the town of Horsens with altitude to spare, and began the approach towards the first crux of the flight.

The E coast of Jutland is full of fiords cutting into the peninsula from the E. There’s one at Horsens, which I crossed at the very western end, and another only 15 km further S, at Vejle. This latter one is funnel-shaped and quite wide (some 6-7km) at the mouth, so on a paraglider you want to be crossing it near the W end, only the wind was pushing me further E every time I stocked up on altitude, making every glide now into wind, to try and get to the narrower end of the fiord. After a few thermals, I finally hit some 1500m very close to the N shore, and decided to give it a go, even if my chosen crossing was actually at the widest possible part of the fiord.

It is funny how crossing water on a PG XC flight just isn’t a very comfortable thing to do – I knew that rationally I had plenty of altitude to make it across, but the mind doesn’t much appreciate it all the same, something that was proven about an hour later, when my friend, Nordic Champion 2016 Thomas Juul, arrived at the same spot and chose to land on the beach rather than cross over this mental barrier.

As it turned out the crossing went fine, but the land I reached on the other side was just a small peninsula too, so the thermal activity there wasn’t very promising. After searching around for a bit I finally sniffed out a good climb from just 270m AGL, the only real low-save of the entire flight. 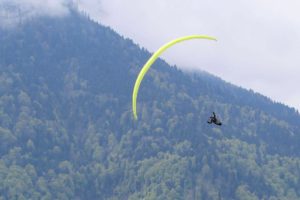 This climb drifted me out over the waters of Lillebælt, the strait that separates Jutland from my own little island (Funen, see above). It consolidated around 600m AGL and eventually took me to more than 1700m – more than enough to make it across to Funen, where I arrived with altitude to spare.

I had been flying for about 3 hours by now, and was only just starting on the fun part – a very big cloud street was setting up over Funen, pointing straight towards the place I was going, so the next hour or so was spent cruising at cloudbase on half bar across the entire island, at speeds up to 75 km/h and altitudes between 1300 and 1900m, only thermalling a couple of times – GREAT way to cover ground over the flatlands if you ask me! After 1h20min and 75km of that I ran out of land again, so I crossed over to the next little island, called Tåsinge. This was where the sea breeze finally caught up with me – by now there were no more climbs, only some buoyancy here and there, so from that crossing and over the next two open-water crossings (to the islands of Siø and Langeland, respectively) I was simply gliding and maximizing my distance.

Each time I had to cross water I had the same doubts as on the first crossing, but each time it worked fine and I arrived with altitude to spare.

I finally landed by the hamlet of Spodsbjerg, on the E coast of Langeland, some five hours after launching at our Fasterholt tow paddock. Distance covered was 165km, making my average speed 45km/h for the flight – nowhere near world record stuff, but pretty good for a bit of island hopping flatland XC!

The cloud street I had followed across Funen was now dumping rain, and the nearest next island was more than 12km away to the SE, so given the conditions I think I got the most out of the day. If I ever hit the perfect day, even this next crossing should be possible, but I believe you need more than 1800m over Spodsbjerg to be sure to have thermal-sniffing altitude left on arrival over Lolland, and that is going to be a rare day indeed.

Lessons to ponder following this flight, for myself as well as for others:

Mads Syndergaard took up paragliding in 1987, flying the now-famous Rubjerg Knude in Jutland, Denmark, as the first paraglider pilot ever. In 1989 he finally got certified through the Flugschule Zillertal in Austria, and bought his first wing, an Ailes de K Brizair 10. He then proceeded to discover that soaring on the Danish coast using wings of that generation was just about possible, but changing to the Airwave Voodoo in 1991 opened up a whole new world, and paved the way for thermal flight.

Mads flew his first World Cup in Governador Valadares in 1994, and has been involved with paragliding on a professional level ever since, most recently doing almost 14 years of work for UP Paragliders, looking after the international dealer network, managing team activities, flying comps and authoring everything aimed at the wider public during all these years.

Mads is often invited to lecture on competition flying, doing seminars, talks, courses etc. for budding comp pilots all over the World.

Nowadays his free time is split between paragliding and other adrenaline sports, and bird- and nature photography (http://photoblog.syndergaard.dk). Mads’ day job is as a freelance text writer, photographer, website builder and much more.