The high-performance cross-country flagship from UP comes renewed and vibrant in its 3rd generation: The heir of what once was the Serial class (EN D) model in the Ultralite Products range, took nearly two years of work and many prototypes to come out as a glider with superb appearance and a “benevolent” EN C approval – with what this means in terms of security. It has 68 cells (3 more than the Boomerang GTO!), a real aspect ratio of 6.9 (5.3 projected) and a declaration of intentions: To dominate the Sport class bringing full satisfaction to the most ambitious XC pilots.
Czech designer Frantisek Pavlousek signs a paraglider that conveys the essence and appeal of the long-standing German manufacturer UP. The first time I saw the UP Trango XC3 in flight it made a good impression on me, not to mention that it overtook me on the task that day… Then a XC3 came into my hands and I could fly the L size (105-130 Kg), loaded with 123 Kg, on a couple of exciting flights that totaled four intense and pleasant hours in the air in various conditions: from gusted spring thermals with powerful updrafts to some mild thermo-soaring of survival at the end of the day. In all cases we could handle the glider at ease, taking advantage of the least lift efficiently and without complications.

Inflation of the UP Trango XC3 is predictable and manageable. Despite its high aspect ratio, it will depict no difficulty for a pilot used to flying Sport class wings. The Trango XC3 is preformed easily as it has good internal air flow. Once we have pre-inflated it and are ready to go, a minimal input on the risers will be enough to start the rise of the wing.
We can perfectly adjust the speed to raise the canopy, and the only detail to keep in mind is the importance of being well centered with respect to the glider and the wind, in order to start the process as symmetrically as possible. This is due to the high aspect ratio: if we don’t inflate the XC3 in a balanced way then one side might tend to come up faster than the other, something that -in any case- will not cause trouble to an experienced pilot who will be able to correct it on the run. Surprisingly, and despite the remarkable aspect ratio, the wingtips do not show any tendency to shoot forward; perhaps partly thanks to the swept-back shape of the wing tips. If you come from an EN B glider of low aspect ratio you will notice that the UP Trango XC3 is much more live and that “it wriggles” a little. On the other hand, if you come from an EN D you will feel it is a block; a matter of perspectives…

Exciting flow in the air
When the XC3 is over our head we can notice its power and winning-oriented performance, then the wish to fly increases exponentially. On the ground and with the glider over your head, you realize that you have to give the UP Trango XC3 what it demands. And that is: some attention and touch from the pilot, as each half-wing is sensitive, especially if it is windy and gusty. In such case, we will notice the wing pulling on one side and the other and we will have to do small corrections, and when I say small I mean that they are inputs of a few centimeters complemented with the use of your body to place yourself under the wing.

Once we have decided to fly and drive speed to the run, everything improves. With speed and pressure the UP Trango XC3 gains poise and consistency; in the air it feels more solid than when we ground-handle it, and just a couple of kg of pressure on the brake are enough to keep the canopy stable. In the air the XC3 is fast and agile; the general feeling is of a “racing” glider –the short and direct handling accentuate this sensation-, but the best is that the canopy keeps internal pressure without losing the determined track and with remarkable pitch stability. Despite the high aspect ratio, the wingtips are pressured and the glider moves in a smooth way, more in one block than what one might expect.

The combination of short brakes, high arch, internal cohesion and speed, makes the XC3 an outstanding “turner”, either in large circles to float up when thermals are wide or carving it tight in “corkscrew” mode when the core is very narrow. This glider has what it takes to take advantage of any type of lift.
The Trango XC3 has short, direct control, with good tension. For most of the flight, 15cm of travel will be enough to manage banking and turning with precision.
I personally like to fly with speed, turning fast and with a good reserve of energy, since this allows me to “draw” the thermals with precision, causing surges in the area of lift while I speed up in the less favorable areas. I call this way to turn “rowing”, and with the Trango it is possible to develop this and other piloting techniques without problem.

Safety and collapses
On the first testing day, we found some turbulence that was strong at certain points, and we observed several collapses of other gliders who were flying with us, however, the Trango did not fold an ear, nor did it do any warning.
Certainly, I was concentrated in flying it and keeping the wing with the pressure it needed in every moment. What I mean with this is that in the right hands, knowing how to adjust the piloting and handle turbulence, the glider has no tendency to collapse and responses are mild, without big surges or particularly brusque movements. I found the Trango XC3 accessible and I believe that you don’t need to be any paraglider “ace” to enjoy it. A sensitive pilot with experience on Sport gliders will soon feel at home with it, and anyone coming from an EN D wing will think that flying the UP Trango XC3 is child’s play.

No excuses to win
Hands up, we already move fast – at about 40 Km/h if the XC3 is well loaded. The wing offers a rewarding sense of good glide, and we are talking of a glide ratio at the level of any “mild” EN D glider, i.e., about 11 points…

With all lines unsheathed and well optimized, the XC3 is designed to offer maximum performance with minimum drag or compromises beyond the safety limitations imposed by its certification.

The speed system travel is long and you’ll need the two steps to squeeze all the juice from the UP Trango XC3. It is a system with ball and two sections, somewhat hard along the travel and more at the end, but the effort is well worth it. The first section is useful for transitions with the best possible glide, while pushing further will take you up to +/-59 Km/h.

At this speed the sink rate is very good, top level, and the only thing you will miss are those 3 – 4 Km/h of advantage that the high-end EN D and CCC gliders have…
It is the type of glider that any skilled and ambitious pilot -who is not flying pulley to pulley all the time- can dream of, especially those who are not willing to make any compromise flying CCC class or even EN D wings.

The UP Trango XC 3 design clearly follows an original line, with a strong personality. It is a very light glider that weighs only 4.9 Kg for size M and 5.2 kg in the L we tried which, combined
with a lightweight harness allowed me to carry a “super pro” gear with low weight that did not exceed 14-15Kgs. This is remarkable weight considering the complex internal construction, with 68 cells and their respective reinforcements, diagonals or mini ribs on the trailing edge.

The glider uses different fabrics, all manufactured by NCV Porcher Sport: 38g and “classic” 27g for the top surface, and the inner sail in 27g Classic. The diagonals and mini ribs are made of 27g and 32g.

The leading edge is fitted with nylon rods, which can also be found on the rear third of the canopy – technology inherited from 2-lines gliders..

It is not a paraglider for being absent-minded. Although its reactions in turbulence are moderate and manageable, the truth is that the UP Trango XC3 requires an active and experienced pilot; it is a glider with a lot to offer to the pilot, but not for free: you have to work it with good touch and always keeping the required inner pressure with body and brakes. It is a great choice for class D pilots seeking to improve passive safety without losing performance. If coming from the EN B class it is advisable to be prudent and do an unhurried adaptation, as while its responses tend to be well-natured, its style of piloting and aspect ratio are “new features” to take into account.

The UP Trango XC3 is the type of glider that any skilled and ambitious pilot (who does not fly pulley-to-pulley all the time) can dream of, especially those that don’t want to complicate their lives with CCC or even low EN-D gliders, because it flies like most and even so it is more stable. The design is attractive and has its own personality; UP are committed to having a design trend of their own that also works very well, offering glide ratio of nearly 11 and top speed of 59 Km/h.

THE +: One of the most dynamic and efficient turns.
The-: Speedbar very effective but somewhat hard. 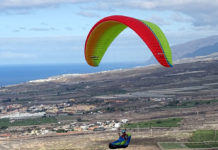